The Sound of Our Steps: A Novel 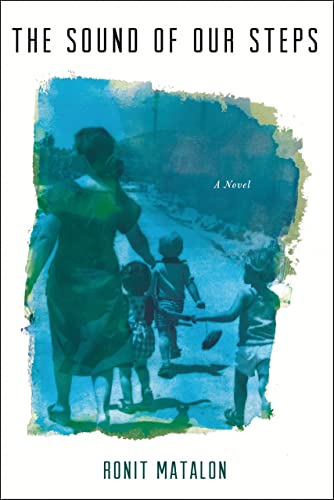 Immigration is often associated with economic opportunity and upward mobility, but frequently immigration results in loss of status and, for the immigrants themselves, downward mobility. For some it is a step backward so their children can take two steps forward.

For involuntary immigrants, such as those fleeing persecution, the dislocation can be traumatic. Such is the case for the fictional parents who immigrated from Egypt to Israel in the late 1940s or early 1950s in The Sound of Our Steps, Ronit Matalon’s brilliant, fascinating, and formally inventive autobiographic third adult novel and seventh book.

The family story is conveyed via a non-linear plot with little dialogue in short often linked chapters ranging in size from a quarter of a page to five pages averaging two pages whose forms include direct conventional realist narration, anaphora, poetic prose, dense multipage paragraphs comprising a single compound sentence, magical realism in two of the 140+ chapters, and in 12 chapters found texts are presented verbatim in italics. In this melange Matalon combines western and middle eastern narrative styles.

One of the multipage sentences provides a taste of Matalon’s prose style. It begins,

“On the lawn in front of the shack, on a sunny Saturday morning in winter, when mild light, shrouded and indirect, and the shrouded, indirect warmth grant a general amnesty to everyone and everything: the shack and everything belonging to it; the field, which is a field of thorns next to Sammy’s welding shop, and beyond it, up to the white of the reservoir, which is not white—only from a distance, in the flat, uniform grayness of the thorns, does it look white; the shacks beyond the hill of thorns, which seem to be planted on the slope of the hill, tilting like cups about to spill their contents; . . .”

The central characters are Lucette, referred to as “the mother”; Sammy, her son from her brief first marriage; Corinne, her older daughter and middle child who is a year younger than Sammy; Toni, who is referred to as “the child” (a wise choice by translator Dalya Bilu who chose not to render the Hebrew word in question as “the girl,” probably since the age gap between the sisters is more important than her gender) is 13 years younger than Corrine, the only family member born in Israel, and the novel’s narrator; Nona, Lucette’s mother and the children’s grandmother who lives next door; Maurice, Lucette’s vagrant husband, Toni and Corinne’s father, and Sammy’s step-father; and the shack, the family’s house in an immigrant neighborhood east of Tel Aviv, west of Petach Tikvah, and south of Savyon (perhaps Or Yehuda).

In Cairo the family was affluent, and Lucette was feminine and beautiful. At 16 and pregnant she fled her much older abusive husband who then divorced her, and her brother’s handsome friend Maurice, who had been smitten by her all along, married her and raised Sammy as his own child. In the 13 years between Corinne and Toni’s births there were numerous miscarriages and at least one infant death.

In Israel Maurice, a marxist political activist and journalist, is shocked at the discrimination his fellow Sephardi and Mizrachi Jews suffer at the hands of the Ashkenazi establishment, and he founds a civil rights organization and a newspaper. When that activity proves unremunerative he moves to Europe where he works as a journalist; the first time he visits Toni she is five years old. Excerpts of his writings (based on Matalon’s own father’s writing) comprise some of the italicized chapters.

To support the family Lucette works 12-hour days at two jobs as a cleaning lady in affluent homes, and a school cafeteria worker only to hear Nona rebuke her for her rough, masculinized hands. Lucette learns enough Hebrew to get by at work, to do shopping and use public transportation, but she has difficulty writing Hebrew letters, asks Toni to write out checks for her to sign, and at home mostly speaks Arabic and French and reads French fiction. Her favorite novel is The Lady of the Camellias by Alexandre Dumas, fils, excerpts of which comprise two of the italicized chapters.

Lucette has a volatile temper. When she comes home from work and sees misplaced items or other signs of disorder in the house she screams, throws things at her children, and destroys belongings. The house and its garden become her preoccupations (gardening instructions comprise two of the italicized chapters, and in one of the anaphora chapters each short single sentence paragraph begins with the arabic word elgena, the garden), and there is no end to her home renovations; her children’s arabic nickname for her is “elmuhandis,” the engineer. When Maurice comes by she puts him to work on home repairs, but since he has no skill with tools (and since he contributes little to no income) she throws him out.

Lucette and Maurice clearly love each other but cannot live together. A recurring motif is a photograph of Maurice, Lucette, and Toni in Venice, Italy where mother and child visited him when he was working in Europe. When he refuses to return to Israel with them he and Lucette have an all night argument that wakes up the other hotel guests and during which he hit her.

Unlike Maurice (who eventually returns to Israel), Sammy and Corrine are not academically inclined and don’t aspire to reclaim their family’s former (pre-immigration) social status. Sammy, who lost the use of one eye to a childhood illness, becomes a successful enough welder to own his own shop and employ one or two workers. Corrine, who has inherited Maurice’s sense of style, becomes a beautician, and since she also inherited her mother’s temper she repeatedly moves from one hair salon to the next.

Corrine has love/hate feelings towards her father and tells her younger sister not to love him, which the child adamantly refuses to do, yet when the adult Toni considers not inviting Maurice to their mother’s milestone birthday celebration, Corrine insists he must attend, which he does to Lucette’s delight.

It is implied or understood that the quiet, bookish Toni, “the child,” our narrator and our author’s fictional alter ego, will become a writer like her father. Her role in the novel is that of witness, yet her own character is not fully developed. Perhaps a sequel will focus on her rather than her relatives.

Dividing the narrative into many short vignettes, including the italicized chapters of found texts, largely succeeds, though the pages of gardening instructions are frankly boring, and including long excerpts of the Dumas novel is questionable. The excerpts of Maurice’s essays about discrimination in Israel, opposing militarism and against humiliating Israel’s Arab neighbors, likely indicate Matalon’s allegiance to her own father’s ideals. She has been an activist in human rights and other left-wing causes.

This English edition is 384 pages while the original Hebrew edition is 424 pages. Since Hebrew is a much more concise language than English either the Hebrew edition has small pages and a large font or the English edition is abridged. If there are missing chapters readers can only wonder whether they would provide an even fuller portrait of this family or encumber the narrative. This discrepancy between the lengths of Hebrew and English editions of Israeli novels is longstanding; see, for example, Eden by Yael Hedaya and Lies, First Person by Gail Hareven (both of which are reviewed on NYJB).

Anglophone readers will enjoy meeting the fictional family in this beautifully written and skillfully translated book that rewards rereading.