The Blessing of Sorrow: Turning Grief into Healing 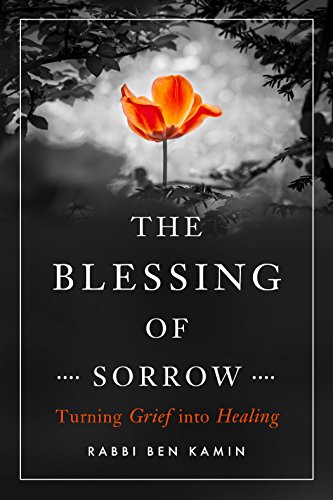 Having not yet recovered from the unexpected loss of my young cousin, I had mixed feelings about reviewing The Blessing of Sorrow: Turning Grief into Healing by Rabbi Ben Kamin. I did not want to subject myself to more sorrow by reading about death. Then, it occurred to me that my cousin died two years ago, yet the pain, if not as debilitating as the first months, remains acutely raw for me and my family. Guidance from a rabbi with decades of experience in comforting both the dying and their surviving friends and family might help. And it has.

Listed at the beginning of The Blessing of Sorrow are, “The ten Commandments of Grief: grieve openly . . . grief is personal . . . accede to the stages of grief . . . remember your dead as they plainly were . . .” Wise and necessary advice on how each of us, before embarking on the journey of healing, must face our grief in our own way. And how the failure to do so might risk exposing us to the debilitating effects of depression as well as myriad other diseases.

Rabbi Ben Kamin, who holds a degree of Doctor of Divinity from Hebrew Union College, is an author and scholar with prize-winning works in civil right and the life of Dr. Martin Luther King Jr. He is also a mender of broken hearts, who has the courage to reveal himself with candor. Because of this, the strongest and most effective sections of The Blessing of Sorrow are his own personal accounts and experiences. The tragic loss 40 years ago of his father. His mother’s failure to properly mourn and how it affected the family. His struggle to keep his own tears at bay so as to act professionally when comforting one or another member of his congregation, the sick, the dying, and their relatives and friends for many of whom he deeply cares. And how he, himself, had to learn to grieve before he could help others embark on their own journey of healing.

There is also a wealth of true stories about people who’ve dealt with their sorrow in their own ways—some successfully, others not. The father who established a mentoring foundation in the memory of his murdered daughter and how its effect on the lives of other children proved a rewardingly and therapeutic experience.  Otto Frank, the 90-year-old father of Anne Frank, who having been asked how he managed to cope with the loss of his family in the Nazi concentration camps replied, “I don’t know that I truly coped. What I know is they are all gone and I am still here. What gave me strength was the discovery of Annie’s diary.” By publishing that diary and devoting his life to spreading his daughter’s story, Otto Frank managed to somewhat assuage his own guilt at having survived after the horrific death of his entire family.

Rita, the wife of Aaron, the synagogue’s sukkah-maker, who pulled herself out of her mourning by establishing the Aaron Schechtman Welcome House. And there’s the story of those who have had much in life yet remain bitter and fighting up to the very end, wasting their last hours as they had their life.

Kamin, through his own encounters, as well as those of his congregants, has come to believe that “there is some sort of an afterlife . . . something greater than what I see in this universe of humankind” and that “souls linger somewhere.” This, too, can be comforting, the belief that although our loved ones are no longer physically present at our side, they nevertheless exist somewhere in one form or another, connecting heaven and earth. Comforting to believe that by remembering them we give their “soul wings.”

It is true that Americans are afraid to utter the word “dead,” which sounds far too harsh and final. We use “gentle euphemisms” such as “passed away . . . no longer with us . . . been called to God,” which according to Kamin “can blur the therapy of grief.”

We find ourselves at a loss for words when attending a funeral, a Shiva, or entering the house of a grieving family. No matter the choice of consoling words, they will inevitable sound hollow and prove ruefully inadequate. So it helps to learn that silence, even if it feels awkward, can convey “the strongest and certainly the most honest message. We are here. We care.”

In the end, the poetic sensitivity and compassionate manner in which Kamin tackles grief feels like a consolation in itself, a balm of sorts. Kamin’s reply to what’s the biggest blessing of sorrow is that: “It grows us. It strengthens us. It makes us cherish life and value people like nothing else does.” Amen to that.