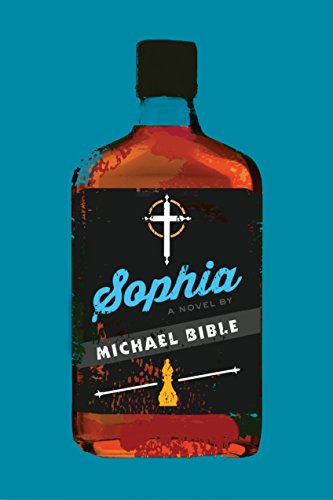 Sophia by Michael Bible is a beautiful contemporary novella that reads like a series of sequential prose poetry vignettes interspersed with visions of saints, real and fake, by the scoundrel Reverend Maloney, the first-person narrator of this less-than-reverent-but-still-spiritual tale.

Reverend Maloney uses his friend Eli, a chess savant, to make money across the United States as they both run away from the Deep South and their problems. In tow is the pregnant Darling, a replacement for a previous lover of the Reverend; and chasing them is a blind bounty hunter, Jack Cataract; and Eli’s Yoko Ono, Nono. The plot is deceptively simple and yet complicated, requiring more than a quick read-through.

This is not escapist fiction for the casual reader, though it may serve for a hard-hitting and unique introduction into the sublime and profane writing of both Michael Bible and near-experimental fiction. While far from the experimental writing and formatting of Mark Z. Danielewski’s House of Leaves, Sophia is sophisticated in thought and simple execution: to have done more to this novella in either story or format would be to ruin it.

Reverend Maloney is inherently likeable as he is flawed, and though he appears to take advantage of Eli’s abilities, there is the sense that Eli is well-aware of what his friend is up to and simply doesn’t care, he is, after all, a “redneck Virgil.” Nono, the older lover of Eli, is an enigma—Who is she? What does she want? Why does she bother with Eli or try to interrupt the friendship between him and Maloney?—as she plays Jack Cataract’s queen in a game of life-size chess throughout Manhattan.

This is a book that leaves an aftertaste more complex than is at first obvious. Sophia is not without its flaws—more than once Bible attempts to purposely provoke with out of place prose such as “A dog licks another dog’s vagina” that can only serve to jar the reader out of the hypnotic flow of New York City detail steadily pulling the reader forward through the novella. Unfortunately, this single line almost undermines everything beautifully written around it; but the line does not decimate the rest of the prose going forward if the reader can forget the line and suspend disbelief once again.