Sons and Daughters of Ease and Plenty 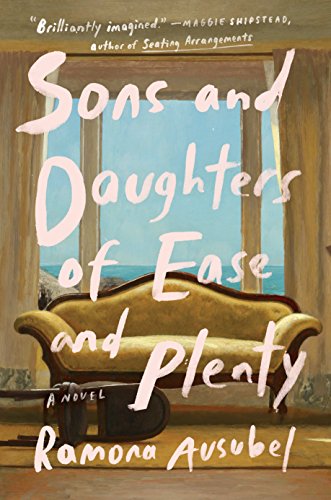 “Ausubel creates so many memorable, delightful, and poignant scenes that make her novel both entertaining and heartbreaking.”

There is more to Ramona Ausubel’s Sons and Daughters of Ease and Plenty than meets the eye. At first glance it appears to be a novel about how the charmed lives of a highly privileged family fall apart after their source of income disappears.

On closer examination, Sons and Daughters of Ease and Plenty is also a coming of age in the 1960s and 70s, an examination of class, specifically old and new money, a look at different generations and the ways that children define themselves in relation to their parents, and a wonderfully imaginative American adventure tale.

Sons and Daughters of Ease and Plenty begins as a sort of fairy tale set in 1976 on Martha’s Vineyard where we meet the wealthy Fern and Edgar and their three children enjoying the end of their summer vacation. Having inherited money from Fern’s old-moneyed parents so that Edgar does not have to work for his wealthy new-moneyed father in the steel business, Fern and Edgar enjoy lives of leisure on the Vineyard and in Cambridge, Massachusetts, writing, and sailing, and playing house.

Their utopia is soon destroyed when they are informed that the money is gone and that Edgar will either have to work in his family business or begin another career. Through a series of misunderstandings and personal crises about the importance of money, Fern and Edgar separate and unintentionally leave the children on their own in Cambridge for close to a week. While each parent is on his and her own adventure of self-discovery, the three children, a girl, aged nine and five-year-old twin boys, are left to fend for themselves.

The present time of the story takes place in 1976. Chapters are organized by various years in the 1960s and 70s, which detail Edgar’s and Fern’s childhoods, how they met, and their marriage.

Ausubel’s prose is clear and lucid, often conversational in style and crisp. In describing the children’s return to school after a weekend without their parents, she writes: “Monday came and Cricket fell into its arms. There was a time by which all three must be dressed and human, having eaten bread and butter, having cleaned the tribe-paint from their faces so they looked like nice little white children. She watched the colors run from her brothers’ wet cheeks like blood and silt. They were giving up their orphaned selves and acting like all the other parented boys with alive dogs and selves that had not recently come up bruised.”

While Ausubel does a nice job of delineating the different social classes in America, specifically, the nuances between the nouveau riche and the blue bloods, with the exception of Fern and the children, she doesn’t succeed in making the characters sympathetic.

Despite her sheltered childhood and entitlement Fern is kind and generous. Perhaps because her character is well developed and she is not merely the daughter of wealth but also has a mentally ill twin brother, an unloving mother, and an incapacitated father, she is less self-absorbed than Edgar.

Edgar is more of a type: a self-righteous son who pretends he is rebelling against his parents’ values by reading Marx and sort of becoming a writer while living well off of his wife’s family’s money. At times Edgar recognizes his privilege but still takes it for granted and believes that he has rebelled against it when he barely has. When he runs off with Glory after Fern suggests that he work for his father, he takes his family’s yacht and can’t imagine a life without his house on the Vineyard. He tells Glory: “You should know that I don’t really believe in money.” But “The yacht, the freshly bought clothes, the southerly escape, counted as evidence against his argument and Edgar knew this.”

Sons and Daughter of Ease and Plenty is clearly well researched and accurate in terms of the time period but relies a bit too heavily on generalizations or clichés about the sixties and seventies. In a 1976 chapter Ausubel narrates: “The rest of the world came into Fern and Edgar’s house on television: the Ohio National Guard shot unarmed students at Kent State. The Weather Underground bombed the US capital, abortion became legal.” This list continues for two paragraphs. While extensive it feels studied and does not bring the era and locations to life.

The strongest, most engaging, and well-imagined parts of Sons and Daughters of Ease and Plenty are the sections that border on adventure or fantasy fiction. Some of Ausubel’s quirky characters, fairy tale-like situations, wonderfully imaginative scenarios, and ability to enter into a child’s thought are reminiscent of Wes Anderson’s film Moonrise Kingdom. Specifically, Fern’s road trip with the giant and the children’s camping out in the back yard while their parents are absent are beautifully rendered. Ausubel creates so many memorable, delightful, and poignant scenes that make her novel both entertaining and heartbreaking.