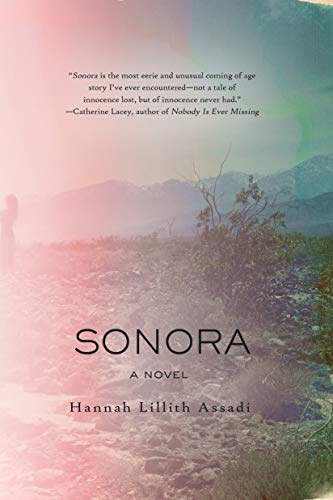 When Pete Townsend coined the phrase “teenage wasteland” to describe suburban adolescent life he was probably not referring to such wastelands in an actual geographic desert, but that is what the suburbs of Phoenix are for high school students Ahlam (aka Ariel) and Laura and what they flee in Hannah Lillith Assadi’s coming of age debut novel Sonora.

Ahlam, our first person narrator who describes fever dreams, desert landscapes, and urban cityscapes in lyrical prose, is the daughter of immigrant parents who met in New York: Rachel, an Israeli waitress, and Yusef, a Palestinian cab driver with a short temper triggered by Middle East news stories. Ahlam does not take sides in her parents’ spats or their nationalities’ conflicts.

“The Deir Yassin massacre took place a few days before my father’s birth. It was anomalous in its violence. Villagers, women, children, were all shot. Town after town from Jerusalem to the northern borders emptied as people left on foot with only their most important belongings, thinking they’d be back soon. Some were lucky enough to board buses, the way only a few years earlier, my mother’s grandparents boarded trains in the green woods across Eastern Europe toward a worse fate.”

Ahlam seems emotionally closer to Judaism and its liturgy than to Islam. In the second half of the book when she lives in Brooklyn she senses some connection when she sees observant Jews, but there is no mention of her interacting with the borough’s Arab-Americans in Boerum Hill or in Bay Ridge.

An aspiring dancer, Ahlam befriends Laura, a musician, whose Mexican-American mother is deceased and whose frequently absent Irish-American father develops vacation properties on Mexico’s Gulf of California. Together the two friends experiment with drugs, alcohol, and sex beginning in high school in Arizona in the opening two fifths of the novel where they first meet an older young man, Dylan, a visual artist visiting from Brooklyn, and continuing more intensely afterward in New York where they hope to pursue their artistic vocations.

The narrative requires several suspensions of disbelief, such as that the young women’s parents would consent to their flying to New York with only three hundred dollars and no return ticket, and that when they get there Dylan agrees to provide them with long term housing rent-free.

Readers may also wonder why they don’t audition for conservatories or college performing arts programs rather than move to a big city with no specific plan and no credential other than a high school diploma. The answer is at least in part Dylan: “He was addictive. He was insolent. He was searing. Laura was right. Dylan was New York.”

In New York it turns out that Laura is a better musician than Ahlam is a dancer. On the other hand, Ahlam, who goes by Ariel in New York, can actually hold and keep a job, first as a waitress then as a secretary. As they get drawn into Dylan’s drug fueled party scene Laura is more adventurous and with no job to go to the next day lacks even Ahlam’s minimal sense of limits.

“Laura sat on the ledge of the window, watching the train snake past, smoking. . . . The hour she began drinking crept steadily up until it was standard to see her with a tallboy of cheap beer in place of breakfast. By nightfall, there was nothing for her to do but call a dealer to keep her steady, awake, alert. ‘Let’s call in the troops,’ Laura said.”

Ahlam, despite her fever dreams and hallucinations, is the more grounded and emotionally stable of the two, perhaps as a matter of temperament and/or brain chemistry, and perhaps because she grew up with two involved parents rather than one often absent one.

Nonetheless they remain close and the novel is a story of a friendship. Ahlam recalls,

“Sometimes at work I heard my voice change, I heard Laura in the way I talked, a certain phrase, a certain grammatical error, her favorite conjunction that never existed, and-or-else, and-or-else we’ll just live by the sea, felt her in the way that I moved, how over the years I came to light my cigarettes just like her, between ring and middle fingers, how I laughed or how my cash was always stuffed and disorganized in my wallet, just like hers was. I had brought her into my skin. I dreamed sometimes that in the mirror was her face reflected back at me. Still, I don’t know where she ended and I began.”

Some readers will prefer the Arizona beginning of the novel for its landscapes and Ahlam’s and her parents’ family dynamics, while others will prefer the descriptions of Ahlam and Laura’s lives in New York and the dramatic tension of whether Laura’s spiral downward can be stopped—and if not, will she pull Ahlam with her? But even in the New York half of the novel Arizona and the theme of home reappear as Ahlam returns periodically to visit her father in the hospital.

Throughout the book one can’t help admiring Assadi’s handsome prose, such as this excerpt from a page long paragraph:

“Sometimes I cannot locate any one night as if my life in New York were but a flood of nights. An eternal room of empty wine bottles, ashtrays overflowing, the maze of screeching trains, Laura at the window, Dylan and his parties, filled with fur and cocaine and moderate celebrity, and the cab rides home, the drunken swipes of credit cards with fifteen-dollar balances behind drivers whose faces I never remembered come morning, dinners with Laura alone, Thai food, not finishing our plates, ordering more to drink, someone at the piano, someone holding the guitar, strumming chords, singing songs, concerts in the beginning, neon flashing, rich acquaintances in Soho lofts, next stop Williamsburgh, living in the dark, living in the night, making it through the day only to afford the night.”

A note on the audiobook version: narrator Soneela Nankani mispronounces the Hebrew word “tefillin” but correctly pronounces all six words of the sh’ma prayer. Apart from that she does a pretty good job. Listeners who purchase the audiobook should take advantage of the offer to also purchase the ebook at a discount; like poetry Assadi’s lyrical prose should be read with both eyes and ears.