Songs of America: Patriotism, Protest, and the Music That Made a Nation 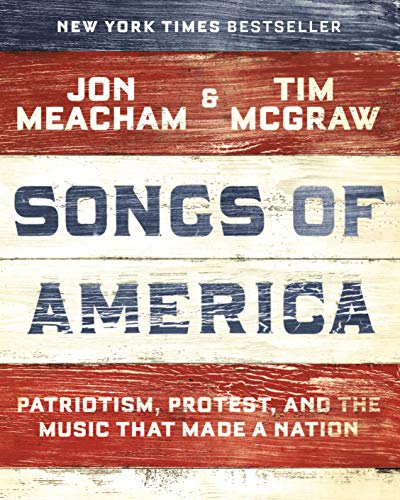 “Music expresses the soul of a nation and illustrates its moods and contradictions from one era to another across time.”

Music expresses the soul of a nation and illustrates its moods and contradictions from one era to another across time. This book conveys this history from the years before the war for independence to the election of Barack Obama. It jibes with the view of Henry David Thoreau: “When I hear music, I fear no danger. I am invulnerable. I see no foe. I am related to the earliest times and to the latest.”

Some of this story will be familiar to many readers; for most readers the book will open an expanding chamber of discovery. Your guide John Meacham is a prize-winning biographer of presidents and America’s battle for its better angels, while Tim McGraw is the most played country artist and a bestselling author. Meacham narrates this book’s history while McGraw comments on the songs selected in a series of sidebars. A fascinating set of reproduced drawings and photos help document the entire story.

The book could intrigue professional historians as well as high school or college students wanting a vibrant supplement to standard textbooks. It should also inspire if not electrify modern suffragettes and supporters of civil rights, cultural cosmopolitanism, and bedrock patriotism.

The book ranges from hymns that encouraged revolutionaries in the darkest times of the revolutionary war to spirituals that lifted the spirts of those who fought slavery to the Joan Baez/Bob Dylan/Odetta/Peter, Paul, and Mary protest classics of the 1960s.

Nearer to today, we read that the Ronald Reagan-Bruce Springsteen divide was a microcosm of the larger political and cultural divides of post-World War II America. Jumping to 2008, we learn that the Black Eyed Peas’will.i.am recorded “Yes We Can” punctuated with quotations from a Barack Obama speech earlier in the year. When Obama accepted the nomination for president in Denver, however, the stadium shook with “Only in America,” which ends:

We all get a chance

Everybody gets to dance

The man who has not music in his soul

Or is not touched with Concord of sweet Sounds,

Is fit for Treasons, Stratagems, & Spoils.

The Motions of his Mind are dull as Night,

And his Affections dark as Erebus.

Let no such Man be trusted.

Perhaps this is why the authors halt their story just before the 45th president.