The Song of Our Scars: The Untold Story of Pain 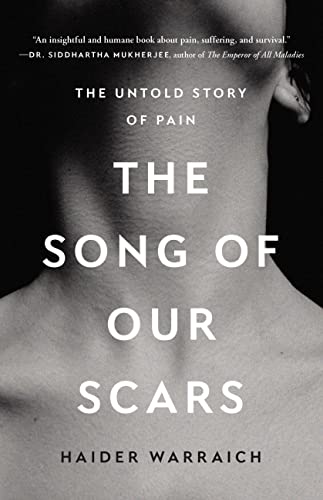 “Warraich’s push to change the way we talk about pain and prescribe treatment is compelling, especially when he elaborates pain’s enculturation and acceptance of pain in our normal dialogues with physicians.”

Chronic pain affects over 1.5 billion people globally. In American alone, writes Haider Warraich in his medical narrative The Song of Our Scars: The Untold Story of Pain, one in five American adults experience it. And Warraich is one of them, making him historian, physician, and patient in his absorbing work on pain. These three perspectives enrich the book as Warraich weaves between historical episodes, anecdotal cases, and his own experiences of pain.

The Song of Our Scars opens with Warraich’s years as a medical student whose surgery ambitions are derailed by an unexpected back injury, a result of a weight-room accident. “It quickly became clear,” he writes, “that surgery was not a viable career path.” The injury’s resulting chronic pain makes Warraich introspective (he was “looking inward only”) and it smothers the empathy he needs as a surgeon. Here, however, set upon the life-long path of pain and combined with his role as a pain physician at Brigham and Women’s Hospital in Boston, Warraich has much to share.

A persistent theme in The Song of Our Scars is Warraich’s argument that change is needed in how America talks about pain and, especially, how we treat it. One necessary change requires a paradigm shift in how we assess pain. For example, Warraich expresses grave concern over reducing pain to a number, a measurement equivalent to blood pressure or temperature: “assessing pain on a numeric scale doubles the risk of opioid overdoses in hospitals,” he relates. As innocuous as the 1–10 scale may seem in a doctor’s office, it ignores other parameters that influence the subjective/patient’s view of their own pain, and, moreover, it indicates that, with a certain number (8 or above perhaps?), a response (a drug) will be required.

Warraich labels himself and his fellow med students as “the opioid generation” since opioid prescriptions “marked every day” of his internship in New York City. In contrast, his previous study in Pakistan did not emphasize opioid therapies and were only prescribed for those who had undergone major surgery or “sustained some horrific injury.” Similarly, a grad student who studied in the U.S. was amazed that in his six-month residency overseas, he never prescribed opioids. The point: opioids as a standard course of therapy are a completely American phenomenon, a point he furthers by noting Americans are 5 percent of the world’s population but consume 30% of its opioids.

When Warraich turns to history, he suggests our present opioid crisis as a part of an ongoing volatile relationship with pain and the drugs created to treat pain. After a pretty brisk gallop through the opium trade of the 18th century, Warraich pulls up to the Civil War and morphine. “The hypodermic needle spread all around the world,” he writes, including, eventually, the battlefront. It was this that “unleash[ed] America’s first opioid epidemic,” he claims. From morphine, German pharmaceutical company Bayer reformulated the drug in 1898, creating the ”less habit-forming” heroin. One can readily see where Warraich is going with his argument as in the next chapter he draws a line to the Sacklers, Purdue pharma, and their “non-addictive” OxyContin.

He draws these sections to a close by a relaying in various ways that opioid medication “does not work for chronic pain”; in fact, “chronic opioid use can make the problem worse.” Warraich indicates how opioids disrupt the balance with the body’s natural pain regulation system of beta-endorphins, and as the body works to restore equilibrium, the impact of the drug is dulled and more drug, consequently, is needed.

In his enthusiasm and commitment to his argument, sometimes Warraich rises into the hyperbolic. For example, he uses inflated language to describe the relationship between depression, stress, and pain: “When people become trapped in the clutches of chronic pain and chronic stress, their lives become engulfed in an eternal inextinguishable fire.” That might be a little much. Warraich’s multiple roles, while largely an advantage, can be a disadvantage in that we are never especially close to Warraich; we are never able to generate our empathy for his own condition, because he keeps Warraich-as-patient at a safe distance. In these passages, The Songs of Our Scars exhibits moments of memoir, but it never quite gets there.

Warraich’s push to change the way we talk about pain and prescribe treatment is compelling, especially when he elaborates pain’s enculturation and acceptance of pain in our normal dialogues with physicians. The Song of Our Scars balances history against narrative examples from Warraich’s experiences a patient and physician to provide an engaging and thought-provoking approach to a difficult topic. Ultimately, it’s a very satisfying read and hard to put down, and when one does, the book stays with you in the questions it poses and the subtle shift it makes in the reader’s understanding of pain and its treatment.