Somewhere Between Luck and Trust 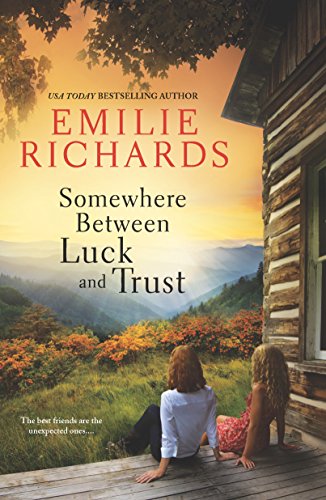 In Somewhere Between Luck and Trust, Emilie Richards brings together two different women with somewhat similar tribulations, who, through understanding and respect use their bitter histories to gain confidence and self-reliance.

Twenty-something Cristy Haviland, daughter of a Bible thumping preacher and indifferent mother, could never do anything right in her parents’ eyes. Cristy constantly struggles for acceptance, but nothing she does is good enough; she is even labeled dimwitted.

Shy and introverted, Cristy hooks up with Jackson Ford, son of a prominent member of the small fictitious town of Berle, North Carolina. When he shows an interest in her, she falls for his charms, only to discover Jackson is a manipulative sociopath.

Innocent Cristy becomes pregnant. He promises to marry her. But while picking out a diamond ring in the local jewelry store, Jackson furtively slips it into Cristy’s purse without her knowledge. She is charged with shoplifting. Knowing she did not steal it is not enough; her fear of Jackson has her accepting her fate and serving eight months in a Raleigh prison. It is there she gives birth to a son whom she places in the care of a cousin will love and provide for him.

Nestled in the North Carolina mountains are the two tiny towns Luck and Trust, and located between them is a cabin known as the Goddess House. This residence is a bequest to a group of women to be used as a type of halfway home offering refuge for those who have made mistakes and are trying to get their life back on track.

Samantha Ferguson, the director of a maternal health clinic in Asheville learns from a friend on the staff at the prison about Cristy and her situation. Sam feels she is the perfect candidate to be a new resident of Goddess House, and the proximity to Cristy’s cousin’s home where her son Michael is living is another plus.

Samantha’s mom, Georgia Ferguson, a teacher and principal at an alternative school in Asheville, had been abandoned in a Georgia hospital at birth—a newsworthy occurrence at that time. Upon meeting Cristy, she forms a close relationship with her, and she recognizes Cristy is dyslectic, a learning disability that had not been addressed when she was young. Georgia realizes Cristy is exceptionally intelligent and decides to work with her.

One day Georgia discovers newspaper clippings pertaining to her birth and a bunch of old charms left in her desk at school. She shares the information with Cristy, and the two put their heads together to determine the cause of her abandonment.

The complex juxtaposition of finding identity, mystery, suspense, and detailed descriptions of the charming countryside, as well as the development of Cristy and Georgia makes Somewhere Between Luck and Trust a pleasant read.

Ms. Richards’ plausible scenarios and credible, compassionate, and even heartless characters, all contribute to creating an enticing plot and intriguing storyline.