Sometimes They Even Shook Your Hand: Portraits of Champions Who Walked Among Us 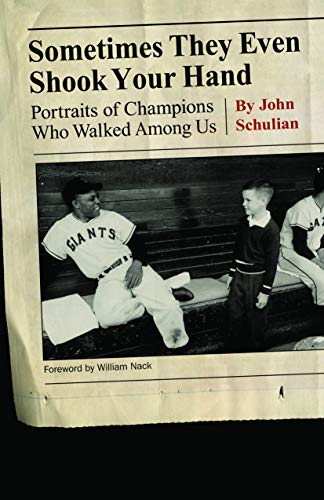 “A master in his own right, . . . Whether discoursing on boxing, horse racing, tennis players or Olympic swimmers, John Schulian delivers tales replete with the elements that make fiction come alive. Readers of a certain age will experience a walk down memory lane and others will have the pleasure of meeting some of the greatest, most interesting, and human sports figures they have never heard of.”

For those who consume the daily news via print, the obituary column and sports page rank high on the priority list. But before checking out the latest local news, the stock market report or the weather for the day, many readers attack the sports section with a passion unparalleled, except that is, for certain sportswriters.

John Schulian proves to be one of the best; he can transform an ordinary story into a mesmerizing literary tale that captures the soul of his subject, all the while entertaining his readers.

In his Foreword, William Nack accurately dubs this collection “. . . sixty-four pieces that take us to places and events only dimly remembered and recall voices long silenced, long forgotten.” Most of the stories were originally written for daily papers in Chicago, Philadelphia, Baltimore and Los Angeles, although some of the longer pieces appeared in magazines like Sports Illustrated and GQ.

John Schulian covers the athletic gamut with stories on football, baseball, basketball, hockey, tennis, boxing, running, swimming, and—best of all—other sports writers. His writing assumes a quality far superior to that of the run-of-the-mill hack who quickly pens a recap of the home team’s squeaker against its traditional rival. Not to disparage local sports writers, but Mr. Schulian delves into the heart and soul of his subject. He bypasses the public persona, which, in many cases, has been displayed numerous times, and digs down until he uncovers the golden nugget. He finds the tears, the romance, the regrets and skillfully crafts a human interest story that reaches beyond the sport.

For instance, Mr. Schulian writes about John Matuszak, the six-foot-eight, 285-pound defensive end who carried a .44 Magnum and a machete and earned the title “Marquis de Sade of the NFL.” Outward appearances portray a figure to be feared, but author Schulian reveals a softer side of the man. At the age of 13, he bought shoes to cover his two-year old brother’s feet when he was buried, a victim of cystic fibrosis. Years later, he learned sign language so he could converse with an Oakland fan who was hearing-impaired.

From the world of baseball, Mr. Schulian brings readers a more personal look at the great Willie Mays. Baseball fans recall a spry young man, home run hitter, player extraordinaire. But when Schulian meets Mays, the former baseball great moves slower than he did in his hay day and gives little thought to baseball. The portrayal is delivered with insight and honesty, but nary a hint of pity – just as Mays would want it. Stories that focus on Brooks Robinson and Gene Mauch reflect the same diplomacy in Mr. Schulian’s writing.

Author Schulian does not shy away from tackling tough subjects. Several stories address the issue of racism in sports. As an example, in one piece he tells the story of Oscar Charleston, the black equivalent to Ty Cobb who would never earn the same respect or salary. He writes, “Bigotry handed him a one-way ticket to obscurity.” In spite of spending “. . . most of two decades as the reigning icon in black baseball,” and performing “. . . acrobatics that have eluded everyone else in the position’s history, leaping, spinning, making catches behind his back,” he fails to earn recognition beyond the Negro leagues.

One of the most poignant stories in the collection relates the heart-rending tale of Ben Wilson, a promising basketball player from Simeon Vocational High School in Chicago. As a short, skinny freshman, Wilson hardly represented the player he would become three years later. By the time he was a senior, his nearly six-foot nine frame, combined with his ambition and ability, brought him to the pinnacle of his high school career. He had earned the “premier player in the nation” award from Athletes for a Better Education, and several prestigious colleges, including Indiana, DePaul, Illinois, Georgetown, Iowa and Michigan, sought to add him to their basketball roster, based on his outstanding performance.

But fate intervened in the form of “. . . bullets from a .22-caliber Ruger revolver. . .” His impact on the city is clearly demonstrated by the incredible number of attendees at his funeral. Schulian writes, “He wasn’t a politician who built an empire by trading jobs for votes, and he wasn’t a religious leader who weathered controversy by showering his flock with blessings. Ben Wilson was a black basketball player with a golden future.” Although many readers may not be familiar with Wilson, his accomplishments, and his untimely and violent death, they most certainly will be affected by his story.

While Mr. Schulian’s up-close-and-personal depiction of this array of sports figures offers the readers a literary smorgasbord, his tales of fellow sports writers delivers the dessert. A master in his own right, Mr. Schulian praises the work of Red Smith who wrote “with prose as clear as the mountain lakes he loved to fish,” A. J. Liebling’s “. . . funny, stylish, slyly irreverent, brimming with information, and, above all, affectionate” writing style, and W. C. Heinz, “. . . master of the crystalline sentence, an understated craftsman who put a human face on every subject from busted-luck ballplayers and boxers to surgeons and dogface soldiers.” Schulian has obviously studied his peers and has drawn from the best of their styles to create his own.

Every piece within Sometimes They Even Shook Your Hand clearly communicates the heart with which Mr. Schulian writes. Whether discoursing on boxing, horse racing, tennis players or Olympic swimmers, John Schulian delivers a tale replete with the elements that make fiction come alive. Readers of a certain age will experience a walk down memory lane and others will have the pleasure of meeting some of the greatest, most interesting and human sports figures they have never heard of.