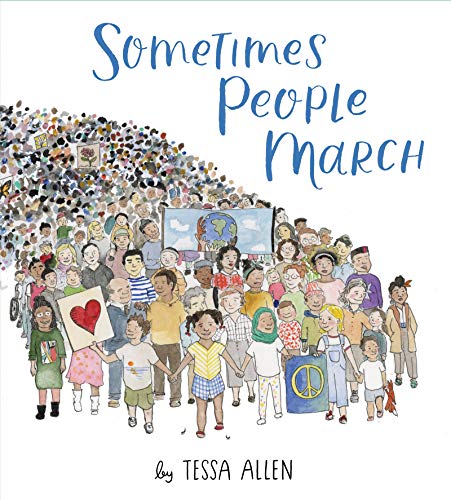 Debut author-illustrator Tessa Allen’s book Sometimes People March marches step-by-step along a growing list of fellow picture book titles telling a similar, yet important story about activism: Let the Children March; The Youngest Marcher; A is for Activist; We March; Brave Girl, Sit-In: How Four Friends Stood Up by Sitting Down; Separate Is Never Equal; Peaceful Fights for Equal Rights; Sí, Se Puede; and Memphis, Martin, and the Mountaintop. Like these other books, Allen presents a case for young activists especially that hope for change comes with being willing to stand up for that change.

Freedom of peaceful assembly, petition, and speech—freedom of expression—date back to the First Amendment of the U.S Constitution. Using spare text and beautiful ink and watercolor illustrations, Allen traces the many movements and marches in U.S. history from the 1899 Newsies strike to the Civil Rights movement to Pride parades to the Black Lives Matter movement to the Women’s March and the 2018 Global Climate Strike—and offers a brief description of each in the backmatter.

Allen engages the child reader from the start, “Sometimes ants march. Sometimes bands march.  Sometimes people march.” She then explains why people march, “to resist injustice/when they notice the need for change/for things (and people) they care about/for the health of their bodies and their communities and the world.” Put simply and directly, Allen notes, “People march for the freedom to love and live and learn.” Showing a wide spectrum of people protesting, carrying clever and creative signs, Allen shows anyone can be an activist and that activism comes in many forms: peaceful gatherings, using the spoken word, in writing, in songs, and with art. Resistance is also expressed in meetings, “by standing up or sitting down or taking a knee.”

Put quite poignantly, Allen suggests that these efforts are not always easy, “Feet get tired, arms get tired, hearts and hopes get tired.” Indeed, many of the causes that people march about are big and complex. What is helpful, however, is the reminder that “we do not march alone.” Just like ants and bands, we are stronger and louder together. Perhaps it would have been useful for Allen to include a mention that marching works and can have an impact: that it turns passive into active, brings attention to injustices, and has the capacity to change people’s minds.

Sometimes People March inspires us all to move from being bystanders to actually participating in worthy actions. Allen notes that, “sometimes great change starts small, with a brave question/a question that calls people together.” Ultimately, marching is about standing up and speaking out, turning wrongs into rights.  “People are more powerful together/and together we find the courage to march.”