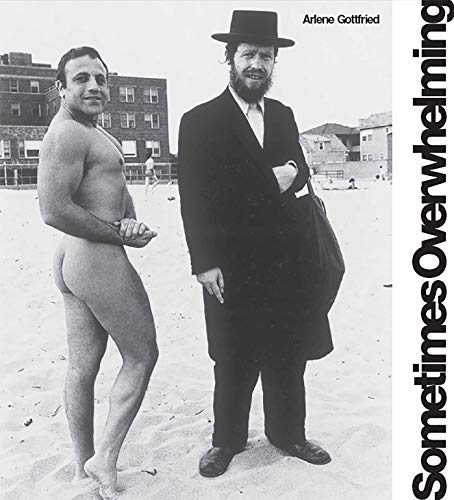 A cavalcade of eccentrics and oddballs parade across the pages of Sometimes Overwhelming by Arlene Gottfried. Bodybuilders, disco dancers, and circus performers are a small sampling of the characters captured by Gottfried. The photographs date “from the 1970s and 80s document a part of New York City that has disappeared,” Gottfried says in a short essay at the end of the book. “It was a rough and unpolished environment.”

Trained at the Fashion Institute of Technology and honing her craft as a staff photographer for the likes of The New York Times Magazine, Fortune, Life, and The Independent in London, she has also exhibited her work at the Leica Gallery in New York and the Smithsonian Institution. Photography was such an all-consuming passion for Gottfried (who passed away in 2017), that beyond her voluminous commercial output, she also snapped pictures for herself. Sometimes Overwhelming is the final product of a lifelong personal passion.

Before the scourge of gentrification flattened New York City into commodified monotony, the metropolis represented a patchwork quilt of neighborhoods, ethnic enclaves, and benevolent eccentricity. Gottfried's genius with the lens is in capturing the atmosphere of New York City as a neighborhood. The paperback reissue of the 2008 work offers an array of individuals and groups going about their business. Flashes of the strange and shocking nudge up against families attending parades or going to the beach. These ordinary portraits are showcased in rich black and white. Gottfried's photos exhibit the gritty realism of street photography while at other times show the lush polish of a studio shoot.

Nostalgia plays a part in this collection, albeit without the vaseline-on-the-lens sappy editorializing that erases anything ugly or unpleasant. The cover photograph encapsulates the book's unbalanced tone. A naked bodybuilder and a bearded Hasidim stand side by side at Riis Beach. It says a lot about the multitudinous richness of New York City, the contradictory nature of American views on masculinity, and the humor inherent in the image. Despite the comic nature, it can be inferred that Gottfried finds the image funny but she—and by extension the viewer—isn't laughing at the subjects. The image is ridiculous without descending into abject ridicule. Sometimes Overwhelming is all about capturing the ridiculous sublime in American culture.

Beyond the erotic photographs, Gottfried points the lens at her own family. “Mommie and Daddy” from 1972 and “Mommie Reading with Magnifying Glass” from 1983 represent New York City residents at their most ordinary and quotidian. Yet the family photos possess an artistic craftsmanship reminiscent of Rembrandt paintings. Somehow she is able to seize the inner light of the individual in an otherwise regular photograph. The “Mommie and Daddy” photo has her parents posed near a wall. Father sitting, mother standing, each in dark clothes, while the image pops with their bright skin framed by each parent's dark hair. Each face contains a beauty, but not one associated with fashion magazines or movie stills. They have the memorable facial attributes akin to character actors, broad and fleshy and wrinkled.