Sometimes I Forget You're a Robot 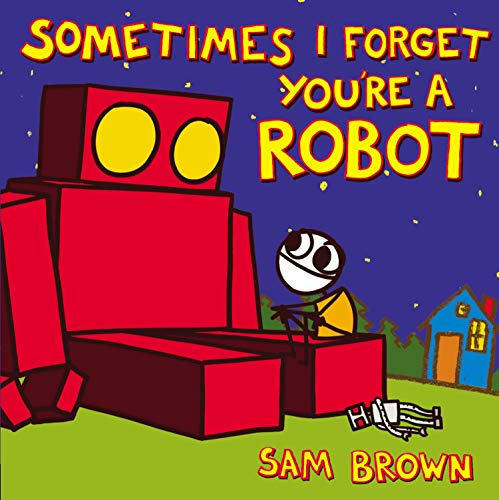 “There is wisdom here.”

Sometimes I Forget You’re a Robot is a deceptively simple story about a boy who dreams of having a robot land in his backyard. But when a giant red robot actually does appear, he is disappointed by its inability to whisk him up to the moon or down to a deep-sea hideout. The boy grouches to the apparently useless robot, “You probably can’t even help me finish my tree house.”

Before he knows it, and to the boy’s great delight, a dream fort has risen from the tree. The view to further adventure is clear. Boy and robot, now best buddies, do not fly into their future—the robot cannot fly. This is okay, though, because the boy now accepts the robot’s limitations. They can walk, even if it takes forever.

It’s the start of a beautiful friendship.

Thoughtful stuff lies under the surface of Sometimes I Forget You’re a Robot, which turns out to be a condensed and efficient coming-of-age story. The boy’s first wish is quintessentially childish: Someone (else) make my dreams come true. But he moves toward maturity when he discovers that he must work to make his dreams come true—and that help comes to those who help themselves.

There is wisdom here. The message isn’t that growing up means adjusting your expectations and thus setting aside your dreams—it’s that having reasonable expectations will help you achieve them.

But the fact that one could write an essay explicating the skillfully layered metaphorical content of a story does not mean it has succeeded. It has to be pleasing whether or not the reader perceives any of its deeper meanings.

The challenge for the ambitious picture book author is to give the surface story as much appeal as its symbolic content. The surface story of Sometimes I Forget You’re a Robot is so simple as to be almost nonexistent. It can be summarized thusly: “A robot helps a boy build a tree fort.”

Granted, more has been done with less (see My Friend Rabbit or The Dot), but such magic requires a truly deft storytelling touch, indelible characters, and/or inspired illustrations.

Mr. Brown’s bright and lively pictures (done with a stylus on a tablet) are attractive—and there’s something appropriate to the spirit of the story that the pictures look as if a child could create them—but in the end, the artwork cannot lift the story beyond the limitations of its bare bones and mostly un-dramatic plot.

Younger children will no doubt readily relate to the boy’s dreams and for that reason enjoy Sometimes I Forget You’re a Robot. The book will hold their attention for a read or two—but it probably can’t do much more than that.