Sometimes I Feel Like a Nut: Essays and Observations 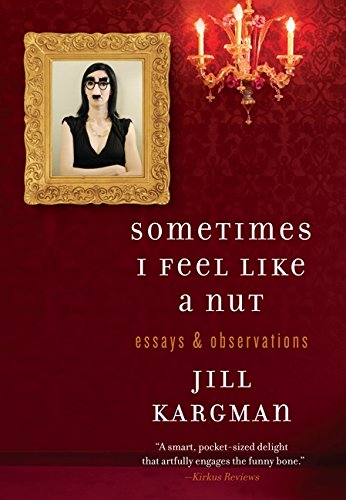 Don’t let the diminutive size of Sometimes I Feel Like a Nut: Essays & Observations fool you—it’s filled with big laughs, emotions, angst and enough four-letter words to get Kargman kicked off “The View.”

The author is a New York City mom, wife, writer of successful “beach-reads” such as Wolves in Chic Clothing, and a cross between David Sedaris and Sarah Silverman.

The title of her book refers to the catchy 1970s advertising slogan for Almond Joy and Mounds candy bars, “Sometimes you feel like a nut, sometimes you don’t.” But, as the author writes in her opening sentence, “The irony is I fucking hate coconut.”

With those first words it should dawn on the reader that this hilarious collection isn’t gleaned from the pages of Mothering magazine—although it should be, because most mothers deal with the same issues such as experiencing a difficult childbirth and coming out of it with a “mommy vagina as big as the Holland Tunnel,” or surviving harrowing family road trips or being diagnosed with cancer at a young age.

With her sense of irony and humor, Ms. Kargman laughs at moments others might cry over, but the author cites movie genius Woody Allen’s Magical Math Equation as her mantra: comedy = tragedy + time, and runs with it.

Reading the short essays about her life—from childhood to mommyhood—you learn quickly that Ms. Kargman’s filter has somehow been misplaced. It’s no surprise that she didn’t fit into the swanky boarding school she tricked her parents into sending her to as a child or that she truly believes she is a gay man trapped in a woman’s body.

“I can perform a one-woman version of most Broadway shows,” she writes. “But it’s not just ’cause of an affinity for original cast recordings that I’m a poof. I’m drawn to gay men. I love their style. Okay, maybe not the bear scene at Rawhide on lower Eighth avec full chauffeur hat and leather vest over flesh. But in general they are gorgeous! And tasteful. And interesting. We like the same things.”

As the reader ventures further into this book, they might be prone to flipping back and forth to the regal photo of Ms. Kargman on the book jacket while trying to digest sentences such as, “As a child I hated her so much I literally wanted to go and find the actress who played her and murder her and chop off her blond curls,” when referring to Nellie Olson from the “Little House on the Prairie” TV show.

Throughout the book the author shares her fears of clowns, mimes and vans—the Chevy and Ford kind—mostly because she knew a child who was kidnapped. But also because she has obviously been scarred by the movie, Silence of the Lambs. But who wasn’t?

While some readers might get turned off when reading about tampons, her precocious kids using inappropriate words in public and her dislike of Eagles band member Don Henley, her honesty in discussing her bout with a rare and deadly cancer makes up for the gazillion F-bombs that appear throughout the book almost as often as the page numbers.

Popping into her dermatologist’s office for a little Botox, her longtime doctor not only refused to inject a little botulism into her forehead, but he missed the mole on her thigh that had been bleeding for more than three years. Her new doctor quickly diagnosed it and gave Ms. Kargman the news that she had a rare skin cancer. An operation—and vanity—saved her life, and readers will be impressed with the way this mom/wife/nut faced death. (Spoiler alert: She faced it with tumor humor.)

Sometimes I Feel Like a Nut is more than funny, more than insightful and more than a guilty read.