Something's Coming, Something Good: West Side Story and the American Imagination 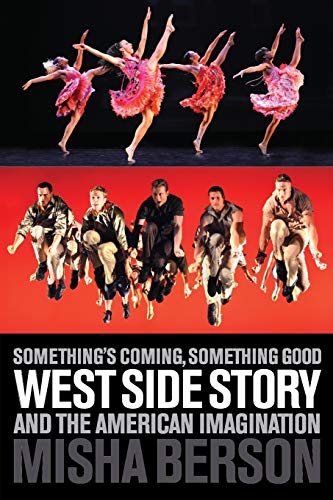 As unbelievable as it is to today’s audience, which is used to gang members shooting each other dead in the streets instead of dancing out their problems, West Side Story, with its snappy tunes and preppy thugs, is permanently ingrained in the public psyche. After a seven-year gestation period in the minds of four of Broadway’s greatest, how could it not have been a hit?

According to Misha Berson’s latest book, Something’s Coming, Something Good: West Side Story and the American Imagination, the musical was not always the monster smash we now know it to be. Nothing about this show was done in the traditional Broadway style.

Leonard Bernstein’s music was modern and complex, with his opening tritone motive becoming his idée fixe, repeated and adapted throughout the entire show. In casting the show, its creators wanted as much authenticity as possible, choosing dancers who could sing and looked the part, rather than big names to draw crowds. In addition, Robbins’s precise choreography and slave-driving rehearsal sessions put his somewhat green cast through boot camp to accomplish the unthinkable.

The story also caused problems—first with the writers and then with the media. In the beginning, West Side Story was supposed to be about Jews vs. Catholics (which makes sense because all the creators were good Jewish boys) and was to be called East Side Story. Robbins always intended to use Romeo & Juliet as a backdrop for his story, but as it was tweaked and changed, thanks to some of the headlines in 1950s New York, we ended up with the Jets and Sharks that we know today.

Part of the reason the men behind the magic had so much time to tweak their musical was because no one wanted to fund it. West Side Story, with its rumbles and knife fights and [SPOILER ALERT!!] tragic ending, came of age against runs of immortal feel-good shows like The Music Man, My Fair Lady, and Most Happy Fella. Investors were leery of violence on the stage and being this far outside of the accepted norm would either make the show or break it.

Ms. Berson’s book catalogs the many stories behind not only the musical, but also the individual songs, the choreography, and the movie. Some of the lyrics were changed for the 1961 movie after getting a little heat on Broadway. Others were actually changed back to Sondheim’s original text, after he had edited it for the stage.

The book gets a little formulaic in the layout, but as the reader makes his/her way through the pages, it is hard not to think first, “How did I not know that?” and then, “I want to watch it again!”