Something She's Not Telling Us: A Novel 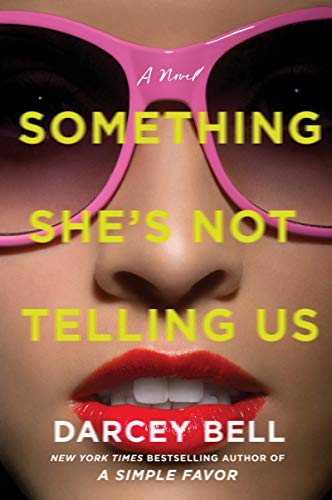 “Darcey Bell builds suspense until one almost wants to skip to the end just to relieve the tension by more quickly knowing what happens.”

Charlotte is living a fairy tale life. Her business as a floral designer has taken off like a rocket ship as she finally breaks into the lucrative benefits circuit. Her husband, Eli, is a wealthy former financier living his dream of life in the world of theater. Best of all, Charlotte and Eli have a precious five-year-daughter, Daisy, who fulfills the position of little princess.

The only thorn in Charlotte’s existence is her younger brother, Rocco, who has a penchant for fast, somewhat loose, crazy, and totally unsuitable women. As Charlotte’s and Rocco’s mother was the poster child of instability, Charlotte tends to move in the other direction. She worships stability and wants Rocco to find The One to marry, and build his own fairy tale life and family.

Unfortunately, Rocco’s latest date, Ruth, comes to dinner to meet Charlotte and Eli bearing a greasy sack of her grandmother’s sticky buns which she insists everyone taste.

Charlotte isn’t a fan of sweets and particularly doesn’t want Daisy eating sugar, but she wants to give Ruth a fair chance. “If making them eat sweets before dinner is worst thing she ever does. If Daisy tries a tiny piece and no more.”

“Even a neutral good-bye is risky. In the past, Charlotte has said, ‘See you soon.’ And she never saw that person again. So now she says, ‘It was lovely to meet you.’”

Charlotte loves him for saying that. Yes, Ruth is a little much.

Among other things, Ruth is not completely truthful about her past. The woman for whom she was a personal assistant was “a narcissistic, coke-addled minor celebrity” who fired Ruth. Left with thousands in credit card debt and no job, Ruth moves in with her grandparents “so they can take care of me and feed me and love me . . .”

When Ruth returns to the city, her grandmother always gives her a bucket of sticky buns. She always walks several blocks out of her way to avoid the house where the young wife and mother was murdered.

Ruth tries to get along with her co-workers at the start-up where she works, but isn’t successful. When she makes a kale salad for a lunch, her co-workers, mostly men, refuse to eat it. “One of the guys said, “I don’t eat this shit . . .”

When Ruth drops by Charlotte’s flower shop, she accepts the invitation to coffee. Charlotte doesn’t want to go, but she wants to be nice. Coffee is like dinner: no matter what Charlotte says, Ruth has done the same thing. Charlotte has a therapist; Ruth has a therapist. Ruth worked in a coffee shop just like the one she and Charlotte are sitting in.

The conversation turns personal with Ruth asking why their mother was sent away. Charlotte is shocked. “She hesitates to say anything that Ruth might interpret as an offer of friendship. Who is Ruth . . . really?”

Another glimpse into Ruth’s point of view reveals that she’s afraid Rocco will grow bored with her and leave. “I honestly don’t know I’ll do when he tells me it’s over . . . I don’t trust myself not to let things get out of hand.”

A dinner out with Ruth and Rocco that Ruth insists Daisy come. The evening ends in embarrassment. Ruth’s credit card is refused, and Eli has to pick up the tab. The bright spot is Ruth’s gift of a tracker in the form of a bunny for Daisy’s inhaler.

Charlotte wishes that Rocco or Eli had thought of a tracker instead of Ruth, but Eli tends to leave responsibility to Charlotte. She discusses her uncomfortable feeling about Ruth with her therapist. She believes she doesn’t have time for therapy, but her therapist helps her so much. He helps her with her anxiety about Daisy, helps her cope “with her feeling that Eli isn’t doing as much as she is, with her suspicion that just because he pays most of the bills, he can leave the heavy lifting to her.”

Charlotte and Eli travel to Mexico with Rocco and Ruth, taking Daisy with them for the first time. Charlotte’s and Rocco’s mother has lived in Mexico since being released from the institution and seems to be fine mentally. But Mom doesn’t like Ruth in the least, although Ruth apparently doesn’t realize it.

Ruth loses her passport, and she and Rocco remain in Mexico until she can get another one. But Ruth’s behavior is strange, and Charlotte is increasingly worried about Rocco, and particularly about Ruth’s fascination with Daisy.

Then Charlotte has a conversation with one of her mother’s friends, who tells her that she knows the accountant for the minor celebrity for whom Ruth said she worked. The accountant had never heard of Ruth, never “had her name on a payroll, never cut a check with her name on it.”

It’s another black mark against Ruth.

Then what parents dread most happens: Ruth picks up Daisy and disappears with her.

Darcey Bell creates a suspenseful domestic thriller that targets all the vulnerable places of parents: that their parenting skills are inferior; that they fail to protect their child; but most of all, that the stranger whom they reluctantly invite into their home and family is not who she claims to be, that she may, in fact, be dangerous.

Darcey Bell builds suspense until one almost wants to skip to the end just to relieve the tension by more quickly knowing what happens. Those who want a fast-paced story may want to give this one a pass, as the suspense builds more slowly than the average thriller, with no car chases, fights, or gun play. In many ways Bell’s building suspense is more terrifying.