Something Is Rotten in Fettig: A Satire 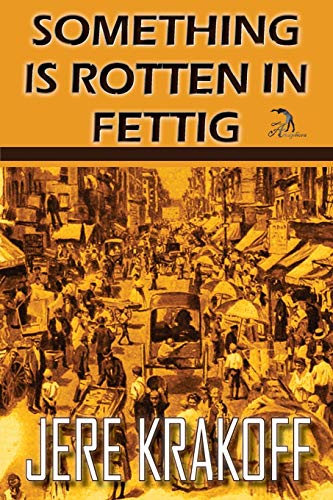 Judge Steifel frowned as he looked disdainfully at the jurors.

“You would not be faulted if you view the accused as odious and reprehensible,” the judge snarled, while Plotkin and members of his family winced. “Such perceptions are understandable in light of the evidence.”

Something Is Rotten in Fettig is a wonderful, whimsical parody of an absurd criminal justice system in a strange nation called Republica, populated by colorful characters with outlandish names. It is a fast-moving legal satire in which our protagonist, Leonard Plotkin, finds himself trapped.

After inheriting a kosher butcher store from his father, his assistant persuades Plotkin to cut meat near the front window, to display his artistry; but his customers are apathetic and sales never increase.

A struggling hypochondriac with poor communication skills and low self-esteem, Plotkin is ordered by his father to spread mud on the storefront windows to prevent bystanders from gazing inside. The community becomes livid at this “punishing offense,” passing a new law that makes spreading mud on a storefront window illegal. Plotkin, again acting on the sordid advice of his father, refuses to remove the mud, and he is arrested.

Leonard Plotkin has been the lifelong victim of his deranged, spiteful father whose reliably defective advice creates mountains of trouble for Leonard.  Bereft of useful legal assistance and the object of national scorn for wiping mud on the windows of his butcher shop, Plotkin prepares to spend the rest of his life in the Purgatory House of Detention, a brutal prison near the Warehouse for the Purportedly Insane and the Women’s Association for the Prevention of Cruelty to the Truly Despised. He is placed next to a livid lunatic.

Everyone in Fettig is convinced of Plotkin’s guilt, including members of his family. Community-wide protests and demonstrations against him make a fair trial virtually impossible. Plotkin suffers all manner of humiliation and indignity.

As his trial begins, we find Plotkin facing incredible odds. Everyone hates him. His attorney’s social anxiety and lack of trial experience make him unfit for defending poor Plotkin. The prosecutor is a widely beloved narcissist whose minions supply constant approval. Even the judge—who always supports the prosecution—and the jury is convinced of Plotkin’s guilt before the trail begins.

This is a witty, sordid and poignant novel; however, it is also a pertinent exploration of a judicial system that protects prosecutors rather than the accused. It reveals an undercurrent of pernicious and malevolent legal system characters whose misguided ethical constructs allow them to control outcomes, rather than explore guilt or innocence. It is a legal system and society gone awry; yet we see ourselves within it, like a mirror of mendacious benevolence. This is how satire entertains, using refined descriptions of the best and worst in our own society.

Author Jere Krakoff, a lawyer, proffers a delightful satire with biting comedy and colorful characters. He imbues his writing with a litany of Jewish references and character names. Krakoff’s writing style is swift, flamboyant, imaginative, and intriguing.

This is a quirky and entertaining story, with colorful and unforgettable characters. It is also coherent and concise. Krakoff’s pace is relentless, and he keeps the reader returning for more. The author is also the creator of several excellent caricatures of the most relevant characters.