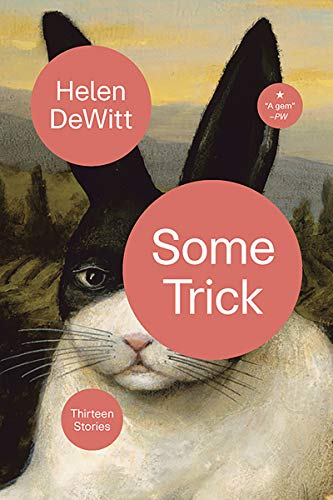 Different but in a good way.

The stories in this collection by author Helen Dewitt have layers of meaning. They can be read for the amusements they are but they also explore interesting themes including the conflict between making art and making money, the blurred line between brilliance and insanity, and the random chance of making the right (or wrong) choice at the right (or wrong) moment.

The first, “Brutto,“ is the most detailed in this collection and follows an unnamed artist who works in a gallery at minimum wage but stays true to her art. She bemoans the high cost of paint is overdue on paying rent, and can’t stand her coworkers. “Brutto“ explores the conflict between art and art education, what the artist has to do to be accepted in the art world, and the drawbacks of being truly novel.

In this story the artist is “discovered” by Adalberto, a rich sponsor, who wants to buy a dress she designed and stitched a long time ago for her university final exam. But not just the one dress, he wants 20 exact copies to put on display, from the fabric right down to the buttons, and he offers to pay her $1000 per dress. The artist expresses her concerns to the reader: the dress is extremely ugly (she hated making it), the dress was made in East Germany with the limited materials available during the Cold War—such material hasn’t been available for decades, and on top of that she is no longer a dressmaker—she is a painter. Of Adalberto’s offer, “She did not know what to do because she just couldn’t.” Despite all the reasons not to, she considers that she better say yes and quickly because Adalberto has a short attention span and will quickly move on to something else if thwarted. She hesitates, Adalberto ups the offer to $2500 each.

The story “My Heart Belongs to Bertie” has an introduction by Dewitt that shows the strength of her skills in mathematics and computer programming. She explains the purpose of the story shows how a mathematician thinks, and that Bertie in the title refers to the philosopher and mathematician, Bertrand Russell. This story is a character sketch of a mathematician who is also a children’s author but who has “issues.” But there are more than a few quirks that makes him unlike your common run-of-the-mill mathematician. Although he has published science fiction stories for children he hasn’t written lately because the voices in his head have been quiet. He tells his agent that he would prefer work with an editor who works with science authors—though his books sell in the children’s fiction category. Then, the voices come back . . .

“On the Town” is a character study of the son of a children’s book author. Stylistically, Dewitt sprinkles the story with entertaining footnotes in the style of David Foster Wallace. As in the previous, this famous children’s book author also makes self-defeating demands of his publishing agent. His adult son, who is poor because of the kind of father he has, has to take a roommate to help pay for his apartment. The apartment is in New York City, and his roommate, who is from the Midwest, becomes a plot device to explore the ways and means of literary tourists’ fascination for the city.  But there’s more, as the interaction of the son and his roommate play out as a retelling of the country mouse and the city mouse.

“Remember Me” is convoluted, disoriented and disturbing. Is it about religion? Is it about aesthetics? Is it postmodern? Yes, yes and yes. Despite all the complications, obfuscations, and non-seriousness, there is however an important question buried inside: What is the true meaning of Yom Kippur?

“Climbers” is about “nothing” the way that the TV show Seinfeld was about “nothing.” The title refers to social climbers. The premise is young hipsters in NYC who have an admiration for a famous Dutch author attempt to help him, in whatever way they can, though the author, whose works have been translated into English, has serious problems of his own. The first is he does not have enough cash to keep pay his credit card bills, and the second is his effort to stay sane.

The Dutch author hopes to cash in on a new book but does not have anything ready for publication. He does have a notebook however, and wonders if publishing the notebook might be easier than the effort of writing a book. “Of course, if you want those words in a notebook to be solutions to credit card debt, there is this bridge that must be crossed.” The bridge is to find the right agent, and he does meet such an agent, one of the “climbers. It is said of this agent, “the thing he could do was build castles in the air and get people to buy them.”

Several of the stories in Some Trick are marked: “Oxford, 1985” and are different in tone in that they are fragments, perhaps fragments from Dewitt’s own notebook, only now seeing the light of day after 33 years. The story “Improvisation Is the Heart of Music” is one of these fragments, containing an inner repeating self-referential survival story within the outer context of a honeymoon.

Another fragment, “Famous Last Words” begins with intellectuals at a dinner party conversing about the supposed last words of famous authors for the underlying purpose  as to determining whether an author’s last words are the best test as to whether an author really believed in God. The subtext is an exploration of how intellectuals deal with non-intellectual concerns, not just God but also whether or not to believe in their own emotions.

One character (as a joke, one supposes) references Waiting for Godot during her seduction, “’This cannot go on.’ I think: ‘this can go on all night.’” This story then moves on to a semi-coherent mashup of writer’s experiments including songs, poetry, math, and short phrases in foreign languages. One intellectual is referred to as X instead of having a name, and this intellectual is not to be confused with another who is identified as x in lower case. Alas however, no DFW-style footnotes.

“The French Style of Mlle Matsumoto” is an exploration of what it means to be a master classical pianist. Here mastership is a matter of character but mastership and character change or perhaps better said mature with time and experience. As in the previous works there is subtext and play, in this case the mention of a particular musical composition, the “Funeral March for a Dead Parrot.” This reviewer thought the piece was made-up for the story, however Wikipedia indicates “Funeral March for a Dead Parrot” as a real thing, published in 1859 (as farce), and was more than 100 years later taken up by Monty Python as the model for their “dead parrot” sketch.

“Stolen Luck” is a character sketch that starts with an interior art-versus-money conflict in an otherwise inarticulate drummer of a rock band who acts out and quits the band in the middle of a recording session. This transitions to the drummer in a game of poker in a bar. The drummer who is hard up for cash offers an IOU of the rights for one of the songs recorded earlier to a celebrity reporter who is also in the game.

“In Which Nick Buys a Harley for 16k Having Once Been Young” presents a character sketch about a member of a rock band that again contains the subtext of insight into the business of making music, and the conflict between making art and making money. This story is another disjointed fragment that ends in the verbal analog of a visual artist who in frustration scribbles madly over the surface of a half-completed artwork.

“Trevor” is yet one more fragment. The story starts as a conversation among academics on aesthetics, with the style the British refer to as “twee.” The story moves on to discussion on the difference between good and kitsch in art, and ends abruptly with the description of the provenance of a painting as backstory to a character named Trevor.

“Plantinga” is a fictional photographer who shares the same name with a real photographer. This story wanders all over, covering academia, art, and the difference between achieving an education in art and achieving an educational degree in art, and how each achievement may be in conflict with the other. Interesting but unanswered questions include, Is a replication of a work of art still art, and If so, then is the recreation the same art? And, Is the value of art what it sells for?

“Entourage” is the last story, and to this reviewer also the best in the collection. “Entourage” gives a call-out to Polish science fiction author Stanislaw Lem (but also borrows from Kafka and Borges, and Fantasia’s “Sorcerer’s Apprentice”). The premise is a wealthy person who is also a fanatic about foreign books (even though he does not understand foreign languages), who also has a hobby of travelling to foreign countries to purchase said books and bring them back. To get ever more books, he delegates, automates, and scales his operation. Hilarity ensues.

Note: This reviewer who likes a good word puzzle now and then found value in using Google and Wikipedia to separate fact from fiction, and to translate foreign language phrases.