Some of My Best Friends Are Black: The Strange Story of Integration in America 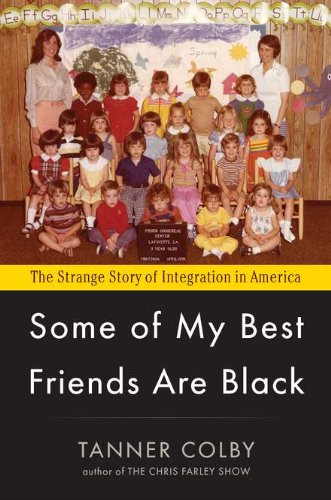 In 2008 Tanner Colby set out to trace the color line through all the places he has lived, his decision inspired by Barack Obama’s historic victory in conjunction with the personal realization that he “didn’t know any black people.”

Judging from the title of the book, he has in the meantime enlarged his circle of best friends to include some black people. Nonetheless, that he needed a book project for this purpose says something about post civil rights America and definitely renders strange the story of integration.

The book is organized in four parts.

In part one we travel to Birmingham, Alabama, where Tanner Colby grew up and went to school, in order to find out how the Supreme Court decision Brown v. Board of Education (1954), illegalizing school segregation, was implemented.

In Birmingham, and many other Southern cities and states, it took almost fifteen years to enforce this decision, but even after that, and still today, integration remains a goal rather than an achievement. The reasons are manifold and do not just have to do with racism.

Using several examples, Tanner Colby shows why the nullification of the Jim Crow laws—and subsequent desegregation policies, such as busing children from black neighborhoods into white schools—did not succeed in bringing about the desired outcome.

The heart of the problem is the territorial separation of white and black communities. The civil rights movement did not manage to undo this. On the contrary: the “racialization of space” was further entrenched during the 1960s and 1970s by way of the real estate market—the subject of part two of the book that takes us to Kansas City.

Once segregation was declared illegal in the public domain, it was privatized with the help of racist, or merely reckless, real estate brokers who used aggressive tactics like blockbusting to drive house prices down in middle-class white neighborhoods opening up to black residents.

They were able to do this by relying on a racially biased classification system for determining housing prices and loans; and by capitalizing on the anxieties of both white and black families who were keen about upholding the color of their neighborhoods as either safer and/or friendlier.

Affirmative action and quotas introduced first by President Nixon have been useful, especially in the labor market, but their impact has been unequal. Part three of Tanner Colby’s book takes a look at one of the most resistant sectors, namely Madison Avenue of New York City, the heart of the advertising industry. This is still predominantly white, with black or mixed enterprises specializing on advertising that targets black consumers. Whether and when this will change is still in the stars.

Charismatic individuals with extraordinary talents will always manage to cross the color line. Their path is easier today than in previous times, even in the advertising industry. That is proof that change is taking place.

But change that is more encompassing, reaching beyond socioeconomic cleavages, depends on communities and civil society. It follows that law and, especially, public policy must take better account of this factor. A policy that is principled but blind to this aspect makes not only bad politics but also bad policy. This is a central theme of Mr. Colby’s book.

The emphasis of the role of civil society is also the reason why the fourth and final part of the book concentrates on religious institutions. The latter often failed to adopt a constructive position with respect to race relations. As a result today there are far too many parishes separated according to color, especially among Catholics.

Throughout his journey and the book Tanner Colby is intent on identifying examples of successful integration and not just on revealing the many and repeated failures of American integration policies. These positive examples speak volumes about the power of community and civil society; but they also suggest that change is not alone a matter of decision but also a matter of time, patience and nurturing.

Some of My Best Friends Are Black is a wonderful book that deserves to be read widely by white and black Americans and both by young and old. It tells the story of post-civil rights American society in a down-to-earth manner combining sense and sensibility.