Soliloquy of a Small-Town Uncivil Servant 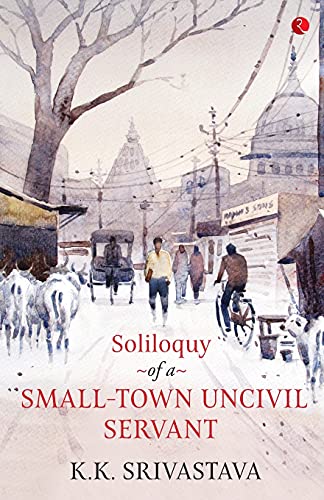 “K. K. brings to readers in both the East and the West indelible images of Indian life, Indian places and Indian people that will not soon be forgotten.”

You think you know India. Maybe you do.

Maybe you have traveled the length and breath of the country, been to the Ganges, Goa, India Gate, Raj Ghat, Kerala, read Tagore, Aurobindo, Roy, watched a zillion Bollywood movies, lived on chai, nan, curry, listened to your great-grandfather talk about the Raj, rubbed shoulders with Jains, Buddhists, Moslems, Hindus, Jews, Catholics, spent a month in a remote village and a weekend in the most opulent hotel.

But you still won’t know everything there is to know about the vast subcontinent, which strikes many travelers as a 21st century Sphinx imbued with more contradictions and paradoxes than a thinking person wants to think about and grapple with.

Travelers and tourists won’t know every corner of India until and unless they have set aside guidebooks and then read and pondered K. K. Shivastava’s new book, Soliloquy of a Small-Town Uncivil Servant. The letters K. K. are abbreviations for Kuldeep Kumar, born in 1960 in Gorakhpur, Uttar Pradesh, India, a place he describes in Soliloquy as “intensely caste-ridden” and “lacking in any worthwhile activity.”

The title of the book provides useful information about the author, who is not always polite and doesn’t always communicate in the clearest ways.

Some of the time, “KK” as he is often called, talks to himself. In fact, he offers monologues and soliloquys. To a great extent, he writes about himself, or at least someone who bears a resemblance to him.

Indeed, in the Prologue to his book he calls it “semi-autobiographical,” though he doesn’t say which parts fall under that rubric. Perhaps it’s all a trick.

In a biographical note at the front of the book, the author explains that “K. K. Srivastava is Director General in the office of Comptroller & Auditor of India, New Delhi.”

His official title makes him sound like a very important person and also someone who knows what goes on in government agencies.

Not all poets can afford the luxury of living in a basement, a garret or on the open road like Walt Whitman. Someone has to be a civil servant, and some civil servants have to write poetry and prose.

KK writes in the first-person. He probably would agree with Henry David Thoreau, the author of Walden and the essay “Civil Disobedience,” who said that the person he knew best was himself.

At times, in this engrossing and perturbing book, a reader can follow KK’s lines of reasoning and the narrative that he weaves. On those occasions it’s possible to digest the ideas he offers, as, for example, when he writes, “Power has its own anatomy, its own patterns. Everywhere it is the same. Either in the real or imagined world.”

Those crystal clear lines prompt a reader to exclaim, “KK knows what he’s writing about.”

At other times, KK loses the reader as, for example, when he explains, “The first principle of collective ethos is to judge people and judge them from the very beginning, to keep at bay those sufficiently gifted with insight to pierce through the veneer or the façade of faces.”

The phrase, “façade of faces,” is good. So is the word veneer, but one doesn’t know whether KK means to be ironic or not. Does he intend to offer words of wisdom or is he pulling the reader’s leg? It could be both.

At times, the author’s intention seems to be to befuddle readers. A contrary sort of fellow, as least from the evidence of this book, K. K. doesn’t want to be too easily or too quickly understood. He wants to provoke reflection, thought and cerebral interaction.

Women come and go in room after room, but KK doesn’t really seek romance, sex, or a relationship. Perhaps what he really wants is fame and recognition.

At times he sounds world weary, as when he explains, “I abhor going to any book-reading session, more so to a poetry-reading session. I know what happens in these places.”

Poetry fans around the world might think they know what he’s talking about. On the other hand, they might shake their heads in disagreement. In fact, they may go to a reading expecting they’ll be surprised and delighted by the new.

Indeed, recently, in a small northern California town, 50 or so people attended a free poetry event in a private library. Robert Hass, the former U.S. poet laureate, performed his work.

So did his wife Brenda Hillman, who has published nine books of poetry and teaches poetry at St. Mary’s College, not far from San Francisco where once upon a time nearly every other person was a poet, or aspired to be one.

The techies have pushed out many of the poets and the artists.

Nearly all of the 50 or so members of the audience at the free poetry event were surprised to learn that Hass and Hillman perform political poetry, protest poetry, sometimes on street corners and sometimes in restaurants where the management asks them to leave. They practice civil disobedience, and sometimes they’re arrested.

Too bad KK wasn’t there to hear Hillman and Hass, and to discover how meaningful a poetry reading can be. But perhaps he will say, “Ah, but that is California.”

Occasionally in this book, he mentions an Indian writer, such as Rushdie, who was born in Mumbai when it was called Bombay. But much of the time, KK refers to writers such as Camus, Sartre, and Proust, though he also mentions Dostoevsky, Poe, and Thoreau.

Soliloquy is dedicated to Michael McClure, the experimental American poet and playwright who is now in his late 80s and near the end of his literary career, though he still writes and publishes books.

At times, KK’s writing is grounded, vivid and complex, as when he describes, “life in the slums, the lavishness of the affluent who have no reluctance or inhibitions in squandering huge sums of money to have fun or a change of the monotony of daily routine at home.”

He can be a trenchant social critic.

K. K.’s Soliloquy is valuable because it offers a portrait of the artist as an Indian civil servant. Indian intellectuals, writers, students and teachers could learn a lot from reading passages like this one, in which he describes: “the rickshaw-wallah and his family who live in the slum from which also hails the maid of the orphanage, the flashy TV anchor, the loving father who, having no fridge in his house, goes out to bring some raw ice to make cool drinks for his little daughter.”

The combination of the flashy TV anchor and the rickshaw-wallah is brilliant.

“Yes, that is India,” one thinks and then adds, “But it is not all of India.”

K. K. brings to readers in both the East and the West indelible images of Indian life, Indian places and Indian people that will not soon be forgotten. For that he is to be thanked and applauded, as the audience applauded Hass and Hellman at the free poetry reading in northern California.