Soldaten: On Fighting, Killing, and Dying, The Secret WWII Transcripts of German POWS 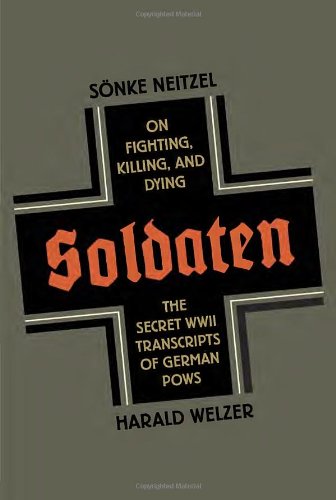 “That the majority of these POWs felt justified in murdering civilians is enough to chill the soul of almost any reader.”

“They seized three-year-old Jewish children by the hair, held them up and shot them with a pistol. The Latvians and German soldiers were standing there, looking on. The whole thing sounds just like a fairy story. If one were to destroy all the Jews in the world simultaneously, there would not remain a single accuser” (laughing).

During World War II, a large number of German soldiers were captured and interrogated by British Intelligence agents. The authors of this book uncovered almost 800 pages of transcripts recently declassified at the British national archives.

Some of the conversations occurred during interrogations. Others were surreptitiously recorded in barracks, holding cells, social halls, and dining areas. Some of the most chilling transcripts came from German POWs conversing with each other, in what must have appeared to them as a confidential atmosphere.

On the surface, German POWs appeared like “normal” human beings. They had, by and large, a typical upbringing. Yet their recorded conversations reveal a terrifying picture, particularly evident in their discussions about participating in genocide.

They do not regard these actions as unjust, immoral, or negative; on the contrary, they brag about it.

That the majority of these POWs felt justified in murdering civilians is enough to chill the soul of almost any reader. Certainly not every POW held these wicked sentiments. Yet German prisoners spoke openly about their “righteous” actions to annihilate European Jews; their singular recurring complaint was that they were unable to complete the extermination.

For some, it was exciting to be able to kill without encountering consequences. This singular lack of remorse is stunning. They described the deliberate mass murder of civilians as though it was no different than exterminating annoying insects.

Many of the captured German pilots and submariners cheerfully described murdering the enemy. Luftwaffe personnel were only too happy to describe their deliberate shooting and bombing of British and American civilians. Submariners gleefully discussed torpedoing medical and other civilian ships, in addition to military ships and convoys transporting war material and supplies.

Their only form of apology was that they were not more successful. They were proud to proclaim that murdering civilians was their job.

Soldaten carries the reader on a whirlwind of genocide in which no one felt personally responsible for his actions and everyone seemed proud to participate. The frame of reference encompassing mass executions and extermination camps represents an idiosyncratic amalgamation of anti-Semitism, support for genocide and innocence based upon delegated responsibility.

The eradication of European Jews was simply not a part of the German soldier’s emotional world. It was a job that had to be done to make Europe “more Aryan.” Moreover, some of the mass killing sites became a perverse demonstration for anyone who desired to witness them. In a sick voyeuristic way, large crowds of soldiers and civilians were allowed to watch the mass shootings for personal edification.

German POWs described without emotion the murder of Jewish children as though they were making widgets in a factory. Removal of the Jewish genetic footprint was necessary, they recalled, “for German purity in Europe.”

The POWs recalled accounts of raping Jewish women before murdering them. The soldier’s attitudes about sexual violence were altogether perfunctory. They regarded the rapes as permissible, “since the Jewesses were to be executed anyway.”

This was internalized and justified as a “logical” course of action in that German soldiers required sexual gratification and these Jewesses were available to accommodate those needs.

In fact, the Germans did not consider mass murder, stealing the Jews’ possessions, or raping Jewish women as immoral or negative. The majority of POWs laughed when describing these acts of violence.

Neitzel and Welzer produce for the reader a chilling glimpse into the immorality of German armed forces during WWII and the Holocaust. The Nazi officers, sailors, airmen and soldiers describe their war crimes and genocide as the norm, or a job that had to be done to improve the quality of life for Europe and, eventually, the rest of the world.

Rape, pillage, torture, starvation, and genocide were distasteful but necessary. The murder of innocent civilians, who were completely unable to defend themselves, had become for many German POWs an excuse for committing crimes that outside of war would land them in prison. Luftwaffe personnel laughed while describing with pride the deliberate murder of British civilians on the ground.

Soldaten will send a chill through your heart.

The reader will listen along with British intelligence as Germans describe with gusto their torture of the innocent. These transcripts lay bare the projection of honor that German armed forces proposed to rationalize their actions. Distinction between genuine military combatants and innocent civilians was completely dissolved.

As we see here, German POWs had been only too happy to murder women and children as legitimate targets. The German soldier in these transcripts saw nothing depraved with these horrific deeds.

The POWs accurately describe transporting huge numbers of Jews in cattle cars to extermination camps, even when they had nothing directly to do with those events. This debunks the suggestion that hardly any Germans were aware of the massive genocide occurring at Nazi death camps scattered across Eastern Europe.

These were not innocent men blindly following orders of the Fuhrer. The authors reveal a clear mentality of powerful violence: men who find murder of the innocent a thrilling experience.

The hardcover edition of Soldaten is handsome, with thick paper and a descriptive cover. The text is well written, although somewhat divergent at times. Although sprinkled with 21 photographs and illustrations, it could have been improved with additional pictures, diagrams, and maps for the visual learners among us.

Near the conclusion, the authors paint a picture of German soldiers as transformational figures. They change from ordinary, law abiding citizens into terrifying monsters bent upon genocide because of a uniform they chose to wear.

The POWs in this case do not include those captured on the eastern front who suffered greatly from weather conditions, loss of supplies, a massive resentful civilian population, and fanatic Russian soldiers fighting from street to street.

If they provided Russia with similar recorded conversations, we’re unaware of it. There is also little way to fact check some of more grandiose statements, commentary perhaps infused with more bravado than veracity.

But Soldaten has an extensive bibliography and it is well indexed, making it an excellent scholarly text.