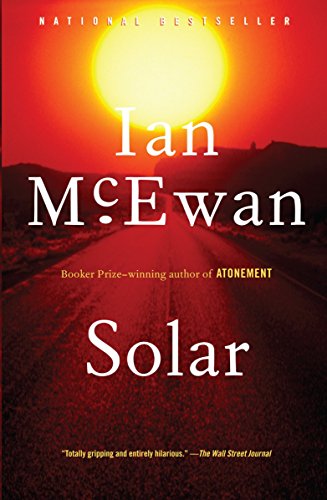 Despite recently winning the Bollinger Everyman Wodehouse Prize for Comic Fiction, Solar isn’t really a comic novel, at least, not in the Tom Sharpe or Douglas Adams style. It’s a wry, perceptive novel with some extremely funny passages, but its denouement is actually quite disconsolate. The opening sentence is humorously intuitive. The second sentence sublimely qualifies the first, and this reviewer knew immediately that this was a book with a sense of humor.

Part one is set in the year 2000. Michael Beard’s fifth wife is having an affair, and he doesn’t like it. He believes Patrice is punishing him for his own numerous infidelities, and his reaction is obsessive. Beard is a jaded Nobel-Prize-winning physicist who’s at a bit of a loose end. He’s the head of an obscure research facility in Reading, near London, developing a useless quadruple-helix wind turbine, and being constantly badgered about solar power by a young post-doctoral assistant called Tom Aldous.

Beard is invited to join a group of artists on a trip to a remote fjord on the island of Spitzbergen to study climate change, and after his late arrival in Longyearbyen, his snowmobile ride to the distant hotel-ship is a hilarious affair. As well as being a short, fat, bald sexual predator, the professor is also a pragmatist, not an idealist like his companions on the excursion. Yet he seems to get along with them, as they help him forget about his wife’s affair with a violent builder called Tarpin.

This trip is based on a real-life odyssey the author undertook, the experience prompting him to write Solar.

When Beard returns, he finds that his assistant, Tom Aldous, has replaced Tarpin as his wife’s lover. What happens next is the stuff of TV crime series, but not without an engaging naiveté and a degree of humorous implausibility. The eventual outcome of the episode results in a file being given to Beard; it outlines a process for obtaining useable fuel sources from direct sunlight, much as plants obtain energy from the sun through photosynthesis. Beard is uninterested at first, but gradually becomes excited about the potential of this science.
Part two skips ahead to 2005 and begins with a forty-page exposition of a landing at Heathrow and a journey, by train, cab, and foot, to the Savoy Hotel on the Strand, incorporating a hilarious incident with a bag of salt and vinegar crisps.

McEwan displays a comedian’s sense of timing and the joke is drawn out just far enough to get maximum impact from the punchline without overcooking it. The retrospective narrative goes on to explain how Beard, during this elapsed time period, came to be arrested and disgraced, instigated by an unfortunate sexist observation with burlesque consequences, and his subsequent rise from the ashes of his downfall.

The real watershed in Beard’s life comes when his current girlfriend tells him she’s pregnant, and he can’t countenance the prospect of being a father at sixty.

Part three takes the reader forward again, to 2009, and begins with an exposé of Beard’s early life—of his mother and father—of his education and early conquests, and of his first wife. Here, the book’s narrative speeds up from its earlier leisurely pace to a fast drive through the essentials, never stopping for an introspective appraisal until it arrives at El Paso, Texas. Beard has set up a groundbreaking artificial photosynthesis prototype in the New Mexico desert, and the eyes of the world are on its inauguration.

This is where his shenanigans catch up with him, and his past comes back to haunt him, as the novel moves inexorably towards its climax.

Solar is an enjoyable read, despite the absence of chapters, which made me feel a little disoriented at times as there are no conventional stopping points to allow for the brewing of a cup of tea, or the checking of emails or the making of a telephone call. The pace moves at a satisfactory velocity, despite some self-consciously long and adjectival phases, which decelerate to slow-mo in their quantum descriptiveness, then picks up speed again.

Generous helpings of physics and psychology are included to give the novel literary credentials and also, inevitably, air is given to some special pleading of pet assumptions and convictions. The comic passages are not quite, but almost, sublime—particularly the premise that the Nobel Prize Award Committee may have confused Michael Beard with Sir Michael Bird.

Ultimately, Beard represents the human race in his gluttonous over-consumption and scant regard for the world’s finite resources. However, love him or loathe him, the fall and rise and fall of Professor Michael Beard is a twenty-first century tale that takes us to the edge of what’s to come and forces us to take a look into the distance.