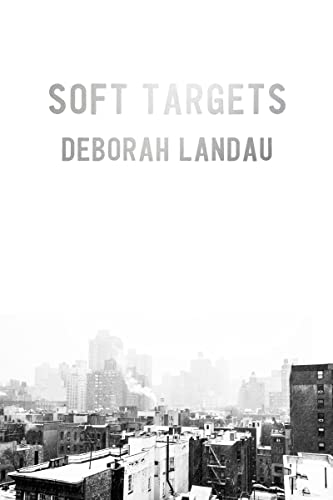 “Landau’s deft touch allows her to shape poems of subtle nuance and strength, poems that build paradox upon paradox . . .”

“About suffering they were never wrong,
The old Masters: how well they understood
Its human position . . .”
—From W. H. Auden’s “Musée des Beaux Arts”

Arriving in the form of eight lyric meditations on violence, Deborah Landau’s fourth book, Soft Targets, opens with a reminder of our shared vulnerability.

and night is a soft target

all of us within it.”

and the city has a hundred hundred thousand softs;

the pervious skin, the softness of the face,

the wrist inners, the hips, the lips, the tongue,

In the hands of a lesser writer, the subject might quickly prove overwhelming, but Landau continues to complicate her premise, echoing Auden’s masterpiece “Musee des Beaux Arts” when she writes, “the violence and real cities/ under siege/ but also filled this morning/ with coffee drinkers, office workers, taxi drivers, boys on bikes—”

That’s the real kicker, isn’t it? In the new global order of climate change and the war on terror, the threat of annihilation exists side by side with our morning cup of coffee. The horror within the poetry lies in the precision with which Landau points out how violence has seeped in everywhere, even to the sanctity of family, to the privacy of our bedrooms:

“and lay there thinking of the bed,

how much life happens there.

At the center of everything the piquant transitory joy

and from this even the charred wrecks,

even the dahmers nazis bid ladens all flesh”

It’s a chilling image, one that not only demonstrates the ubiquitousness of violence but the fact that we, each of us, carries a bit of that violence within us. In fact, the key question of the book seems to be “How is it to have a body today?” One might argue this is the key question of all of Landau’s work, particularly, her most recent book, The Uses of the Body, only here the question becomes more difficult, more nuanced, more dangerous.

The book represents a real step forward as Landau turns her unwavering focus both to the self (the inner body) and the body politic. In doing so, the poems are simultaneously fierce and poignant in their gaze, at their best capturing the difficult malaise of our times with the playfulness of a daughter painting flowers on her toenails:

“The end of America, no one knew how to manage it

but we tried the typical ways of numbing pain—

my daughter painted tiny flowers on her toenails,

I mixed honey and vodka, squeezing in a lime,

and we carried on with our breathing—

my father was still alive, my body kept aging,

the pills helped a little, not a lot.”

The litotes of that last line says all we need know. Whatever relief we can hope for will help “not a lot.” The poems are most successful (and they are nearly always successful) when understated in this way. At times, however, the subject matter threatens to overwhelm the poetry: “The good news is we have each other./ The bad news is Kalashnikov assault rifles, submachine guns, pistols, ammunition,/ four boxes packed with thousands of small steel balls.”

Here, the dramatic pairing of the more banal phrase “The good news is we have each other” with the overtness of “Kalashnikov assault rifles,” etc. feels as if the poet is trying too hard. Similarly, with the more propagandistic lines: “And what now of dreaming?/ We’ve failed the planet has published our failures./ Our crimes are perpetual methane and sweltering, arrogant and endless—"

More often, Landau’s keen intelligence and gift for sound play rescue what on the surface might appear to be a less fresh image with language that makes each line sing. “Locked and loaded/fire and fury/ the daft-master/ bastard art of war/ (otherwise known/ as look I’ve got this big bad prick/ with which to blast/ your astroturf).” What could have been a stale image of the patriarchy gets blasted.

Or here where the lightness of Landau’s diction and the acuity of her poetic ear transform a prosaic opening: “I don’t know/ what’s so neo/about neo-nazis . . .” into a simultaneously whimsical and frightening ride: “ought we to get going now/ galloping seems/ a good idea.”

In the end Landau’s deft touch allows her to shape poems of subtle nuance and strength, poems that build paradox upon paradox, as in this excerpt from a poem about her grandmother’s wedding dress, a grandmother who survived the Nazis. “she sewed a wedding dress/and it too was soft silk soft.” Softness appears here both as vulnerability and death. Perhaps more startling is the way in which repetition creates the paradox of beauty and hope and the fragility that comes with it in this line describing the birth of the grandmother’s baby: “and she too was soft/ too soft/ the new body/ plumping with blood.” The inversion of “she too was soft” to “too soft” embodies much of the grace and elegance of this collection.

Landau writes gorgeously about the necessity of living with both beauty and pain, of the war between love and terror, the eternal battle between Eros and Thanatos. Though the collection plunges us deep into the horrors of the modern terror state, it never turns away from the possibility of hope.

“In the snow we are angelic

and it’s not discouraging in fact it is marvelous

when the snow has its arms around us

and we walk the streets as if safe.”

It’s a tribute to Landau’s prodigious poetic gifts that she can hold the paradox in her hands so well, simultaneously allowing for hope and complicating it. The knife-edge of “as if safe” cuts both ways.