So Tough to Tame 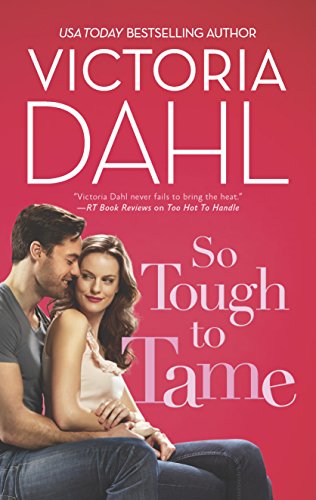 The author treats us to a heartfelt, entertaining love story about a bright, successful woman who got knocked off the fast track, and a cowboy who thinks he’s not good enough to try for anything more.

After a sordid professional scandal leaves security expert Charlotte “Charlie” Allington without any employment prospects, she grabs a job offer back in her hometown of Jackson Hole, Wyoming. The job is at a brand new resort in the Grand Tetons run by an old school chum and her husband, and it comes with an apartment on the grounds.

Charlie wants some privacy though, so she finagles an apartment at the Stud Farm. Right across the hall lives Walker Pearce, whom she tutored in high school and had a hopeless crush on.

Walker’s a real, live cowboy who’s gotten even taller, broader, and sexier with the passage of time. He always considered Charlie too smart for the likes of him, so he thinks he’ll content himself with just looking at the gorgeous, sexy woman she’s grown into.

But sparks fly between them right from the start, igniting the sassy, fun dialogue Ms. Dahl is so adept at. Charlie reminds herself she’s no longer a skinny, insecure kid watching Walker flirt with every girl except her. So she goes after him, and the chemistry between them explodes.

Ms. Dahl handles their love scenes with raw, explicit intensity. Sex between Charlie and Walker is not kinky, but it is edgy, giving their physical encounters real power and heat.

Equally powerful are the problems Charlie and Walker have to deal with in their professional lives. Something is very fishy at the resort where Charlie works. The owners are spying on her, and she discovers her unsavory and oft-divorced brother had a hand in her hiring. She’s forced to unravel the mystery behind her bosses’ strange behavior in order to save her career.

Walker’s affinity for pretty women got him fired from his last job at a dude ranch when the boss discovered Walker and his wife flirting with an affair. Even worse, the wife is still stalking him. Although he’s good at working with people, Walker can’t fault the other dude ranchers for their reluctance to hire him after that story gets around. So he’s forced to cobble together hardscrabble jobs herding cattle at working ranches because he thinks that’s all he’s qualified to do.

Charlie discovers Walker is not stupid, as he always claimed, but dyslexic. She knows he is capable of far more than he gives himself credit for, and she does her best to convince him of that. But she won’t trust him with the truth of the scandal that brought her back to Jackson Hole, so he won’t trust her with the real reason for his refusal to consider another career—until she forces the issue and drives him away.

Charlie and Walker are warmly sympathetic characters who have both sex appeal and depth. They’ve both made bad decisions about previous relationships and are still paying for them. It’s a delight to cheer them on as they work through their issues while they fall more and more in love with each other.

So Tough to Tame brings together all the signature ingredients of Victoria Dahl’s engaging romance novels: sparkling dialogue, complex and interesting lovers, colorful secondary characters, and a setting in the majestic Grand Teton mountains.

Funny and sexy, with depth and heart, So Tough to Tame is a worthy third installment in the Jackson series.