So Many Roads: The Life and Times of the Grateful Dead 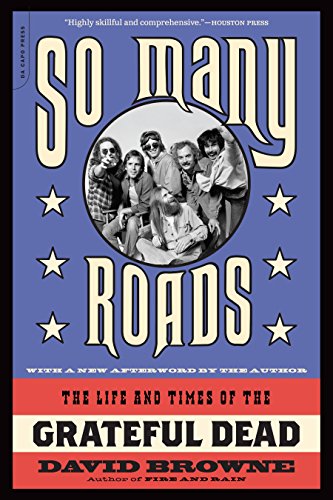 No one at a Dead concert is dancing to “Eyes of the World” and hearing the same thing.

There is the idea that America loves money. It doesn’t matter how weird, how out of it, how different you are from everything else around you, if you can make money America will embrace you on every level.

Sure, it will screw with you, rough you up and try to take that hard-fought success away from you. Still, if you make money in this country you are going to be absorbed into the mainstream, into advertising, and into the homes of Americans no matter how much you laugh at it all.

Someone else will read Browne’s look at this lifetime of misadventure and wildness and deduce that hard work and dedication will always bring success. No matter how the story ends, the Protestant work ethic found at the heart of America will always pay off.

Others will make a bee-line straight for the drugs and sex. After all, it’s a story about rock ’n’ roll.

This is indeed the story of the entire band. But, at the heart of this lifetime of success and excess, is Jerry Garcia.

He starts as a good-natured guy who loves banjo and guitar, girls, Camel non-filtered, and comic books. In the early days of the sixties he sits on a hill with his young girlfriend awaiting the end of the world as Kennedy and Khrushchev play chess in the waters that surround Cuba. Ahead of him is a blue universe, wide open spaces.

His story ends somewhat less idyllically as he lays sleeping on a quiet bed inside a rehab center. The young man with a charming smile who is seldom seen without a guitar in his hands is trying to find himself in that lost universe when his body finally says “enough.”

In the way that Lennon shaped the Beatles, Garcia shaped the Dead. There was his pursuit of Phil Lesh, a classical musician who had never played bass in his life, to become the bass player for the Warlocks. It was the quiet acquiescence that he afforded a young Bob Weir when the sixteen year old learned to play a Clorox jug so he could be part of the Mother McCree’s Uptown Jug Champions. There was the approving look he shot at keyboardist Brent Mydland on stage when the band was jamming to “Feels Like a Stranger.”

As the house band for the early tribal gatherings that would become known as Acid tests, Garcia, Lesh, Weir and the blues-loving Pigpen manage to coalesce into something else. People just naturally gravitated towards what they were doing. As Rock Scully, an early manager, observed “They were charismatic in an anti-star way.”

Scully is just one of the many people who float in and out of the narrative. As with any successful band, there is a large cast of supporting characters. Browne does a great job of introducing those on the periphery of the Dead scene. The ones who really matter such as Garcia’s partner Mountain Girl or the King of Acid and sound design Owsley, are always there.

Browne moves across chapters by focusing on a single day in Dead history. As precise as this is, these chapters often travel through time within their own structure. In a subtle way they slightly mimic the disjointed feeling of an acid trip as each deviation from the timeline eventually brings you back to reality.

A memorable segment dated Menlo Park, California, October 27, 1962, takes side trips into the formative years of Garcia, Weir, and Lesh telling stories of schools and friends and pranks that they all enjoyed. Another, Pittsburgh, April 3, 1989, centers on a massive concert. One larger than they could have ever imagined back in 1962.

Despite their free-wheeling reputation the world of the Dead was, like all human endeavors, a political one. There were inviolable rules, people jockeying for position and favor and hanger-son who just cause damage. Soon there was also a massive business to run. One that eventually caught the attention of the Fortune 500. The politics are as poisonous as the drugs.

A genuine fan of the band, Browne creates a mix of the familiar and the new that will appeal across the boards. He speaks honestly and plainly about the loss of band members to drugs, alcohol and the harshness of the road. The next minute he relates how the song Dire Wolf emerged while watching the film version of Hounds of The Baskervilles.
There is the Dead’s connection to SNL and stories of how both Bob Dylan and Clarence Clemmons wanted to join the band. One of the most unexpectedly sad chapters documents how deeply the band was affected by the stunning growth of fans after the success of MTV promos.

This is a band that is totally unique in American musical history. The music is what will last across centuries as the stories of drug abuse and wild times drift into myth.

The Dead inhabit the musical space between bluegrass, folk and John Coltrane covering Rogers and Hammerstein’s “My Favorite Things.” The songwriting of Garcia and Robert Hunter holds bits of Copland, Ledbetter, Foster, Gaye, Berry and Bernstein.

In the end Brown tells an amazing a story about hard work by a group of outsiders which leads to massive success.

It turns out that the long strange trip is just the American Dream with banjos and acid.