So Good They Can't Ignore You: Why Skills Trump Passion in the Quest for Work You Love 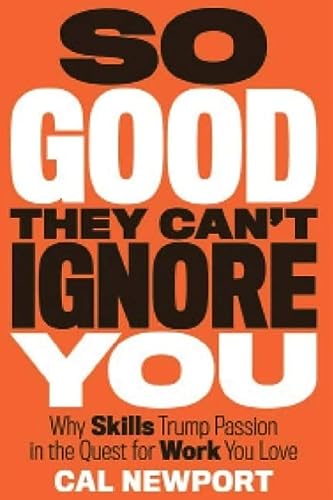 This book should have been a 23-page booklet.

Written in a disappointingly sophomoric style and using thin, anecdotal arguments and inductive rather than deductive reasoning, and focusing on post-graduate students, it draws the wrong conclusions. Yet So Good They Can't Ignore You has its moments. The title itself is a great piece of advice. Unfortunately, the rest of the book doesn’t support it.

This is Cal Newport’s fourth and latest book. It starts off well enough in the Introduction by stating “the importance of ability” is a common thread throughout the narratives in the book. No argument.

Then the author reveals something telling, stating, “This is why I wrote this book in a manifesto style.” The book ends with a final chapter comprised of 30 pages of self-focused application of Dr. Newport’s rules over his own career. Unfortunately, this does not add any substantive value to the book—just page fillers that do not support his basic premise.

The title is a quote from comedian, author, actor and musician, Steve Martin from a 2007 interview with Charlie Rose. This is good advice for anyone. It took Mr. Martin ten years to perfect his routine. Ten years before he broke out to “make it” as a headliner. It would seem difficult to stay with something that long without any passion behind it. Yet the author takes this and turns it around to say that passion is bad and “deliberate practice” is the answer. An alternative approach might have been to state, “Be as good as you can be at everything you do—and adding a little passion in the mix cannot hurt.”

The basic issue here is the author tries to make the argument that passion is a false prophet. In fact, chapter three is titled Passion Is Dangerous. The author writes that the root of the “follow your passion” idea can be traced to Richard Bolles’ 1970 book What Color Is My Parachute?. He further states that the baby boom generation has now passed this “passion-centric” lesson down to their children, “the echo boom generation.”

This chapter is an unfortunate example of the faulty logic that permeates this book. “The problem, of course, is when they fail to find this certainty, bad things follow, such as chronic job-hopping and crippling self-doubt.”

Dr. Newport dedicates a significant portion of the book to justifying this approach, yet his examples do not support his conclusions. What would have made this a better, more practical read would have been to combine his “craftsman mindset” (an approach to your working life in which you focus on the value of what you are offering the world), the “10,000-hour rule” (the idea that excellence at performing a complex task requires a critical minimum level of practice), and “deliberate practice” (the style required to continue to improve at a task) with the passion it takes to stay focused for long enough to attain that much success.

Dr. Newport states, “Irrespective of what type of work you do, the craftsman mindset is crucial for building a career you love.” This would seem to indicate that you can learn to love any kind of work as long as you work very hard at doing so.

A surprising element of this book is the author’s writing style. For someone who is so highly educated (Dartmouth and MIT), in the sciences (electrical engineering and computer science) with a Ph.D., Dr. Newport’s writing style like that of a sophomore—certainly not what one would expect from such a frequently published author and academic.

Dr. Newport begins the justification for his premise with The Passion of Steve Jobs to explain that if Steve Jobs followed his passion he would have been living in Los Altos Zen Center rather than creating Apple. Further, the author states that in Mr. Jobs’ famous 2005 Stanford commencement speech his encouraging words to the audience to “Follow your passion—life is for the living” are wrong.

The author provides several detailed stories of people he personally interviewed who have followed their passions and failed. He uses these to leapfrog to the conclusion that everyone who follows his or her passion will fail. This is simply not justified by his few anecdotal examples. Most of these people simply made bad, uninformed choices rather than only following their passion.

The anecdotes the author uses to justify his premise come from primarily brilliant, unique nonconformists, hardly the mainstream examples one would expect to support an argument intended for a mainstream audience.

His alternative suggestion is to develop the craftsman mindset—but I would argue not instead of, but in addition to having passion or at least a strong desire to improve. Effectively, Dr. Newport is constantly asserting using work hard to improve your skills will lead to your eventually loving your work. The anecdotes he uses to justify this are as thin as his arguments against passion.
The one important question—where to apply one’s craftsman mindset to develop “career capital” (a description of the skills you have that are rare and valuable to the working world)—is never answered.

So Good They Can't Ignore You: Why Skills Trump Passion in the Quest for Work You Love had the potential to be very helpful for individuals early in their career path. If the author had merely combined rather than offset passion from the craftsman mindsets he could have been instrumental in guiding more people to careers that mattered—to them and to society.