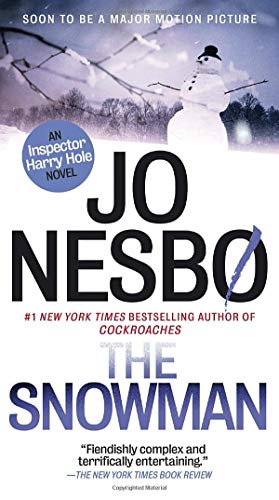 Readers of crime novels will soon be targeted by Alfred A. Knopf’s media blitz for this author and novel. The campaign by this august publisher of fiction would have you believe that Mr. Nesbø is the heir apparent to the late Stieg Larsson, Scandinavia’s sensational bestselling author of such tales as The Girl with the Dragon Tattoo, The Girl Who Kicked the Hornet’s Nest, and The Girl Who Played with Fire.

We all know that a good media blitz at the right moment can sell the public anything (the pet rock and the hula hoop leap to mind)—but Mr. Nesbø isn’t even close to inheriting Larsson’s crown.

It’s not that Mr. Nesbø can’t write. He can, and has sales in the millions from previous novels to prove it. But The Snowman is not the novel that will secure him the throne. It might, in fact, get him sent into exile.

The first thing a reader notices is that Mr. Nesbø is trying too hard. Scenes cut quickly from one to another as if the book’s first iteration was a screenplay, or as if perhaps the author were looking ahead to the film adaptation too soon. The effect does not a page-turner create; it is simply jarring and confusing.

The characters, too, won’t remind you of anybody you’ve ever known. Worse, Mr. Nesbø sabotages his one promising character, a female detective, by turning her late in the novel (without adequate motivation) into a rogue cop and unlikely whacko. Alert Larsson fans will see right away that Mr. Nesbø has sacrificed the one character of his who might have rivaled Larsson’s intriguing Lisbeth Salander.

But The Snowman’s critical failure is a lack of credibility, a deficiency that is almost always fatal. In this tale of the hunt for a serial killer, Mr. Nesbø tricks the reader again and again with wildly improbable developments: character switcheroos, red herrings galore, motives in need of crutches and wheelchairs, and characters in need of a blood transfusion.

It’s true, of course, that lots of readers don’t mind at all the wildly improbable, and many more even seem to require it. After all, improbability is the sine qua non of today’s very popular vampire stories and other horror tales that sell by the boatload (hearseload?).

But a crime novel should make societal sense, just as the law broken by the particular crime makes societal sense. Consider, for instance, the case of the serial killings now unfolding on Long Island. The solution, when it comes, if it comes, will make a kind of sense, however sick. Believable crime fiction follows the same arc of cause and effect.

The Snowman comes off as an attempt to blend traditional crime fiction with the horror genre, a sort of Stieg-Larsson-meets-Stephen-King affair. Doesn’t work. In reading a story, the veteran (and fair) reader subscribes, whether he knows it or not, to Coleridge’s “willing suspension of disbelief.” The work is, after all, clearly labeled “fiction.” But nowhere did Coleridge or any other self-respecting literary critic advocate adopting an embarrassing gullibility.