Snowed In for Christmas: A Novel 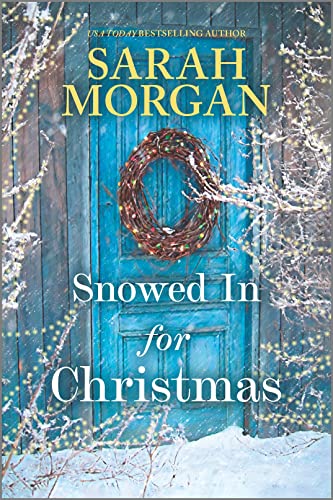 Lucy Clarke loves the marketing job where she has been working for six years. After giving her all to her previous employer where all she got was negativity and brash comments, she is hired by Arnie, whom she now considers her savior. Now it looks like their London company is in trouble after losing two big accounts, and Lucy fears they may soon be closing. Lucy is determined not to let that happen and to find new clients.

It's right before Christmas and the employees are discussing possibilities to keep them viable. They hear the owner of Miller Active is scouting new agencies. Ross Miller now uses the Fitzwilliam Company—an agency trying to lure Lucy to work for them.

“This is the point where I’m going to challenge you all,” Arnie said. “Do I believe in miracles? Maybe I do, because I have my eye on one of the biggest prizes of all. One piece of new business in particular that would solve all our prob­lems. The biggest fish in the pond. Any guesses?” He glanced around expectantly. “Think sportswear brands. Think fit­ness and gyms.”

And now Lucy had a whole new reason to panic.

Not sports. Anything but that.

She was intimidated by gyms and she had no reason to wear sportswear. Her exercise regime involved racing round London meeting clients and influencers, and scoping out new cool places to include in their visual campaigns.

Wishing Ted was here because it was right up his street, Lucy scrolled through the big brands in her mind, discarding the ones she knew were already locked into other agencies.

“Are you talking about Miller Active? The CEO is Ross Miller.”

“Only by reputation. His family own Glen Shortbread.” Her grandmother had described it as comfort in a tin and it had been her favorite treat at Christmas.

“Is Glen Shortbread the one in the pretty tin?” Maya chewed the end of her pen. “The one that changes every year? Last year was snowy mountains and a loch? I love it. Delicious. I buy it for my mum every year. Just looking at it makes me feel Christmassy.”

“That’s the one.” Lucy still had three of the empty tins in her apartment, even though she didn’t have room for them. She couldn’t bear to throw them away, so she used them as storage. Two were full of old photographs, and the third held the letters her grandmother had written to her during her first year of college when she’d been homesick and tempted to give it up.

“Rebel Ross,” Lucy murmured and saw Arnie glance at her with a question in his eyes. “I read an article—last year, I think. That was the title. ‘Rebel Ross.’ All about how he was the first generation not to go into the family business. He wanted to strike out on his own. The implication was that he and his father were like two stags fighting over their territory, although given the way Miller Active has grown I’m assuming he has proved himself by now.

Knowing next to nothing about sportswear, Lucy wants this campaign, then when Arnie falls ill and needs time off, she vows to get this account to thank him for all he has done.

Lucy travels to Scotland and, because she cannot reach Ross by phone, she will propose her advertising scheme at his home in person. What does she have to lose? Maybe she'll get the door slammed in her face, but so what? Lucy will otherwise be alone on Christmas, and she looks at this as an adventure. After losing the beloved grandmother who raised her since her parents' deaths and is now gone, she only has an empty flat to look forward to. That’s no fun for the holidays.

Not dressed warmly enough for Northern Scotland, Lucy arrives to frigid temperatures. Exhausted and starving, she stops in a café in town for coffee and while indulging, she chats with some local women asking for directions to the Miller's Lodge. They suggest she leave immediately for it is starting to snow, and their property is in the mountains with roads to there treacherous in a storm. As she drives, Lucy's nerves escalate while maneuvering the twists and turns of the tiny road. Anxious as she is, she only want to drop off her proposal and get back to London.

She is surprised upon reaching the gorgeous property; not only is it spectacular—so much so, that Lucy fanaticizes about living there—but it also is freezing and as the snow gets heavier, she thinks about making it back home.

An elderly woman answers the door and appears shocked to see her. When she states her name as Lucy, the woman gets excited and drags her inside. Overwhelmed by the grandeur of the home, decorated to the nines for Christmas, what draws Lucy in is the warmth of a fire in the hearth and the scent of something baking.

The older woman says she is Nanna Jean, and she settles Lucy on the couch, offering a hot cup of tea. The rest of the family enters the living room, and Nanna Jean introduces Lucy to Glenda, Ross's mom; Alice, Ross's eldest sister with her boyfriend, Nico; and Clemmie, the youngest. Upon hearing Lucy's name, they all get enthusiastic making Lucy wonder what the fuss is all about. Ross hasn't arrived yet, but they say he will be happy to see her. Why, Lucy thinks? How did he know she was coming?

It seems Alice and Clemmie made up a fake girlfriend for Ross to keep Glenda and Nanna Jean from prying into Alice’s affairs. Though Nico proposed, Alice is uncertain about getting married, and the more her mother and grandmother press her, the more upset she is. So the sisters’ plan is—what is better than letting them think Ross has a new love interest? He actually doesn’t but isn't it hilarious the moniker they picked happened to be Lucy?

Appalled when she finds out about their subterfuge, Lucy wonders what Ross will think when he hears his girlfriend is there. Embarrassed, Lucy wants to get out of there before making a fool of herself, but as she leaves, she slips on the ice and breaks her ankle. Alice and Ross take her to the hospital where she's instructed not to stand for several days. Now between her injury and the "storm of the season," it looks like she will be staying there indefinitely.

Meanwhile, as Alice ponders a commitment with Nico her tension escalates. Then, when Clemmie drops a bombshell of an announcement, things within become more strained.

With everyone present and Lucy thrust into the midst of their family drama, secrets are divulged, and hopes are shared, yet the bond within them becomes stronger, and they accept Lucy as one of them. So, she thinks, there's nothing like being stranded in a mountain home during the holidays. With the scent of shortbread baking, pine from the Christmas tree, a fire in the hearth, and the love of this family, what could be more perfect? But Lucy isan outsider. . . .

So what will Alice decide? Will she marry Nico or continue devoting her life to her medical practice? What does Clemmie want so badly? And will she attain her goal? Finally, can Lucy save face with Ross and the family and get the contract with him to keep Arnie's company afloat?

This lighthearted and easy-to-read novel is filled with many different personalities and emotions that all blend well given their devotion to each other. Nanna Jean with her meddling and offhand comments adds humor to the narrative, yet it is evident there is love within, coupled with the warmth and acceptance they show toward Lucy. But the question is . . . will Ross accept her proposal?