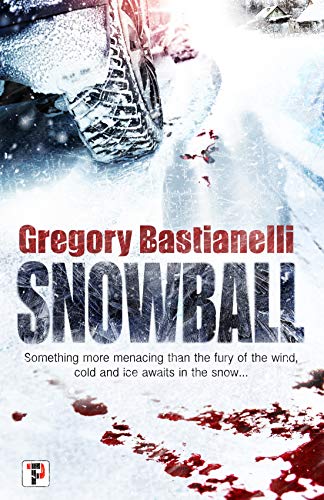 “no matter how cruel an individual may be, there could always be one person who loves them.”

It’s Christmas Eve and everyone is dashing around madly, buying those last-minute gifts before hitting the road to get home. The fact that a blizzard is on its way doesn’t deter them one bit.

Until a snowplow blocks the road, that is, its driver missing, blood on the floorboards.

“Eight vehicles caught up to the snowplow stuck in the right lane of the turnpike. They ground to a halt, an eighteen-wheeler, a coupe, a luxury sedan, a hatchback, a minivan, an RV, and a station wagon. There was nowhere to go, so there the occupants sat.”

Now those late-night customers are snowbound, stranded in freezing temperatures with highway exits blocked. Taking refuge in a camper, they reminisce of winters past.

“What was your worst winter memory?” Mr. Volkmann asked, inquisitive eyes surveying the weary faces of the travelers.

They tell tales of the Krampus, Santa’s evil twin, of personal victories and defeats, of losing loved ones or worse, until the atmosphere inside the RV is filled with more despair and unhappiness than the moment they saw the snowplow.

At last, one of the group protests.

“What’s wrong with all of you? What horrible stories. Why would you tell these?”

“Yes,” his wife concurred. “To show we’ve all had worse winter experiences than the one we’re having now. It’s a way of finding hope in a dreadful situation. To know we’ve all endured much worse.”

Mrs. Volkmann has no idea of what she speaks. Otherwise, she would never have said that.

It’s at this point that Clark Brooks tells his story of a school bully, Leroy Sledge, and someone else remarks he also knew the person. Soon it’s discovered everyone in the group is connected in some way to Leroy Sledge, even if only by a chance encounter.

“Clark shook his head. “It has to be a coincidence.”

“I heard it said once,” Werner piped in, “that there’s no such thing as a coincidence.”

“That’s right,” his wife agreed. “Everything happens for a reason.”

“Then what’s the reason for us stuck here?” Mason said.

“I’m not sure we ought to find out,” Felker said.”

A light shines through the haze of falling snow, interrupting their debate. They formulate a plan—two of them will leave, hiking across country, seeking the house and hoping it has a phone.

As everyone knows, one of the rules of any horror story: Never separate yourself from the group.

“Was the light from the house in the woods real? Or were they marching through the snow on some fools’ errand? Clark looked back at the hulk of the RV and wondered if he’d ever see an of them again.

A thought to hang on to, Clark.

Little do they know that terrible things are waiting in the snow-filled countryside, waiting for the ones who leave, as well as the ones staying behind, and those terrible things have only one purpose.

It’s a familiar plot: People of various dispositions having absolutely no relation to each other, brought together for some sinister purpose that is revealed as the group is decimated, one by one. Horror movies use it all the time. Agatha Christie did it best in And Then There Were None.

And then there came Snowball . . .

This version of that plot device has a bit of a twist. The group are caught in a blizzard on the highway, all unknowingly bound to each other through one person and one act.

Like the butterfly’s wings causing a storm thousands of miles away, Snowball reveals how one small act can affect so many people’s lives. It also points out that no matter how cruel an individual may be, there could always be one person who loves them.

As gently as falling snow, it’s a story piling layer upon layer of horror, until the reader is weighed down by all that’s happened but continues hoping for a Happy Ending, that everything will turn out all right. After all, it’s Christmas Eve, isn’t it? Bad things can’t happen on Christmas Eve.

At this point, pause to listen for the rustle of pages as readers read the last sentence ending the story, then frantically look for more of the novel. Also listen for howls of disappointment at the fate of the one person they’re hoping will survive.

There may also be some shouts of, “That’s it?” for Snowball’s ending is as abrupt as death and just as unexpected.

Thank you, Mr. Bastianelli, for one heck of a sleigh ride. Got any more shivers up your sleeve? How about tackling some other holiday?

Valentine’s Day is always a good one.