Snotty Saves the Day: The History of Arcadia 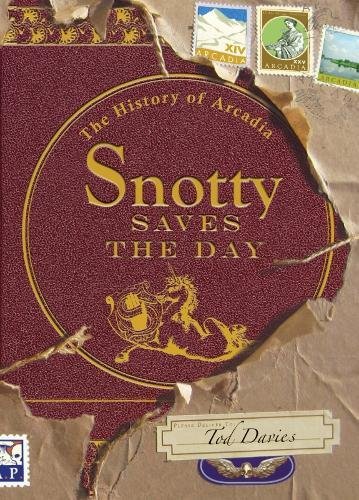 “Like many authors who prefer imagination to reality, Ms. Davies blends folklore, fairy tales, fantasy, and even oral tradition—and does so brilliantly . . .”

True. Further, he happens to be the unusual and repulsive protagonist in Tod Davies’ first novel, the fantasy Snotty Saves the Day.

There are two stories in the book, told simultaneously, but in vastly different ways: The first, Snotty’s adventures, is an original and exciting fantasy that tells of two mythic warring countries, peaceful and humane Arcadia and Megalopolis, the unimaginative, cold, bleak city that surrounds Arcadia.

The second story, if it can be called that, is constructed in the reader’s mind as aided by ever-present footnotes written by Professor Devindra Vale with the help of author Davies. It serves much more serious and cerebral matter on the reader’s plate. These notes, under a thin guise of fairyland, prompt readers to explore complicated issues, not only about the powers and place of imagination and especially goodness in life, but also about the importance of love and charity in any society, fictive or real.

Like many authors who prefer imagination to reality, Ms. Davies blends folklore, fairy tales, fantasy, and even oral tradition—and does so brilliantly—taking the captive reader even where he might not want to go. Ms. Davies is a cheeky storyteller, and uses a writer’s tricks, subtle or blatant, to tout unabashedly her message of the importance of freedom over control and the power imagination in fantasy and in life. Her command of literary devices never caters to the reader. While she is original enough to conceive an army of Teddy Bears, she also is talented enough to convince the reader of its existence (though readers might be embarrassed to admit it).

Ms. Davies is never sweet without reason, and she can be as cutting but even crueler than other fantasy writers that she has been compared to: Lewis Carroll, Tolkien, Philip Pullman and others. She also has a gift similar to the neoclassic satirists, shades of Pope, and equal to Swift, his damning of science in LaPuta, for instance. Author Davies writes cutting passages where lambs turn the spit roasting a sheep, and not too soon afterward, writes of sheep serving lamb to diners. Snotty, himself, trades one of his fingers for supposed treasure.

Ms. Davies excels at details and delivers them naturally. Her interest in food is apparent in passages about feasts or picnics. Her love of animals is evidenced by animal characters and the treatment of them, loving or cruel. Her play with nomenclature is telling, and the name of any place, event, or character is carefully chosen and often huge fun for the reader. Consider a college in Cockaigne, Teddy Bears named by color, or The Duke of New York in this fairytale. Readers might sigh at a most beautiful young man named “Luc”—but beware: those three letters are the first three letters in “Lucifer.”

Although, Ms. Davies’ choice of Arcadia for her utopia is apt, traditionally Arcadia is thought of as a pleasant place, but also calm and simple. Some aspects of her book’s Arcadia are far from simple, but they do fit into the book with the author’s sure hand.

While Ms. Davies’ Snotty is called “fiction/fantasy” for the convenience of bookstore shelving and media, and is considered a “niche” book, the depth and breadth of Snotty Saves the Day is likely to break through the niche label and, in time, become a bestseller with a future strong backlist.

Snotty Saves the Day is a book for mature or precocious teens, for fantasy and tale-within-a-tale lovers, and for thoughtful adults who seek the wonder and optimism so badly needed in today’s times. Yes, Snotty is an ugly boy, but readers shouldn’t give up on him until they’ve finished the book.