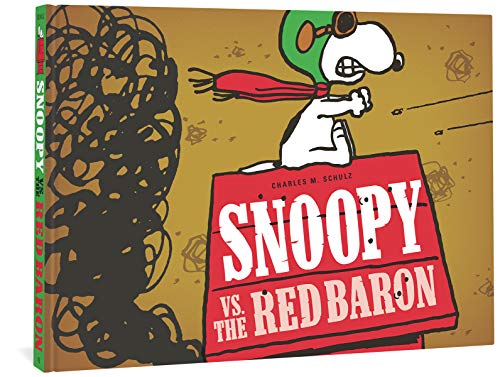 “This is the pure magic of Peanuts.”

The battle between Snoopy and the Red Baron has entered modern legend. You can go almost anywhere in the world and they will know that Charlie Brown’s dog loved to fly his doghouse into battle. It is probably safe to say that at this point in history more people first heard of or learned of the First World War through a Peanuts strip than they likely did inside a classroom.

The legend, quixotic at heart, yet straightforward in its telling, is simple. A dog goes after his enemy knowing full well that his enemy is the best on the planet. In short, is the same struggle for existence that we all face every single day. We all have to, at some point, get on that doghouse and fight someone or something that we don’t want to.

Snoopy vs. the Red Baron by Charles M. Schulz gathers together both dailies and Sunday pages that highlighted the storyline around The Red Baron. The emphasis is on what Schulz created and nothing else. The strips presented in this collection takes both us and the Peanuts strip right back to where we all belong.

Though essentially a gag-a-day strip, Schulz was fond of building mini-arcs inside his dailies. Editor Gary Groth and book designer Jacob Covey have gathered together dozens of these smaller stories and given them their own spotlight. This creates dozens upon dozens of small story arcs that sing with the modest clarity of Schulz’ heart, mind, and pencil.

Given the immense weight of Peanuts’ presence in the media, it is so nice to be reminded why we love the strip. When you see Charlie Brown or Snoopy on blimps, on Hallmark Cards, in movies and on TV shows, it is easy to become removed from what Schulz originally created. This collection is an important reminder of the simple, unadorned greatness that gave birth to such a merchandising giant.

There are a few small sections that divide the strips by a slight theme. The first focuses on Snoopy “Quaffing beers, flirting with the mademoiselle, and cursing the Red Baron.” A second isolates his daily battles. Pulling titles from the strips themselves, Groth and Covey have also created smaller sections inside these thematic divisions that create a sense of cohesion across a week or two of strips. The anthology ends with a significant run of Sunday pages featuring the titular characters. All the strips are presented in black and white, heightening our appreciation of what Schulz made look so simple, yet so few have ever come close to duplicating.

The idea of the Red Baron first appeared inside the October 10, 1965 Peanuts Sunday page. Dressed as the WWI Flying Ace, Snoopy walks with his head held high in the now familiar helmet and scarf with a riding crop under his arm.

This wasn’t the first time that Snoopy had assumed a fake identity. He had spent plenty of time pretending to be many different animals before this. Only now, with an adult adversary off-screen, the odds are much different. Now he is going against a world-class enemy. This isn’t just a small dog pretending to be an anaconda and going after Linus, clutching his blanket and hiding from Lucy in tall grass.

With that, Schulz’ run on the Red Baron takes off. Many consider the Red Baron-themed strips that began in the mid-sixties to be one of the peak moments in the entire run of Peanuts.

Schulz would quickly expand the action. He moved from the top of the doghouse and into the sky. Soon he would be staging scenes in French cafes as well as the trenches of the combat below. The artist expands Snoopy’s vision of WWI even more when he incorporates Snoopy’s brother Spike into the strip as well as the dog’s appreciation of the women of France.

We all strive for greatness and, like Snoopy’s fight with the Red Baron, we almost always fall short. No matter what has happened, each and every one of us knows that we have to get back up on that doghouse and battle with idiot bosses, incompetent clerks at a store, or friends who think something they heard on talk radio is true.

Like those personal battles, the battle against the Red Baron is internal one. Only Snoopy sees the Red Baron. Only he imagines adventures that occur during a war that is a full two generations removed from anyone who appears in the strip with him.

It wouldn’t have taken much for Schulz to go with the easy gag. To create another daily that falls inside the slapstick that can be found in his work. (Lucy pulling the football away from Charlie Brown being the prime example.) Make no mistake about it, he does include plenty of sight gags and action. Especially in the damage to Snoopy’s beloved Doghouse. (Is that Picasso in there, just one of many treasures found in his doghouse over the years, safe behind bullet-proof glass and stored inside a concrete bunker? Just wondering . . .).

But there is something unspoken, something personal inside Peanuts that so many readers find in the strip. Maybe it is just the laugh inspired by the image of a dog drinking a beer in France.  Maybe you see Snoopy’s fight with the Red Baron as a metaphor for your own battles with a friend or neighbor.

Whatever you see or read into a Peanuts strip, it is yours. That is one of Schulz’ gifts as an artist and creator. He works with a quiet understanding of what it means to be human and in that same quiet, creates an intimacy that moves past our all the noise in the world and walks directly to our heart.

This is the pure magic of Peanuts.