S'Mother: The Story of a Man, His Mom, and the Thousands of Altogether Insane Letters She's Mailed Him 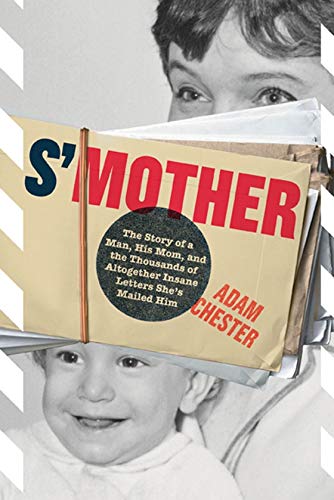 In S’Mother: The Story of a Man, His Mom and the Thousands of Altogether Insane Letters She’s Mailed Him, Adam Chester recounts a lifetime of humiliating circumstances suffered at the hands of his strange and bizarrely random mother—as well as the thousands of outlandish, often disjointed, letters he received once he could get far enough away.

Adam’s story begins with a recounting of a day in seventh grade when his mother wandered through the boys’ locker room, loudly bleating her son’s name and ignoring the smattering of huddled, semi-naked pre-pubescent boys in her proximity.

One would assume something awful had happened—perhaps the accidental death or dismemberment of a family member—the only possible reason that someone’s mother would be screaming her son’s name in the boys locker room. Under normal circumstances, in anybody else’s life, this might be the case—just not in Adam Chester’s world. Indeed, nobody had died; Mrs. Chester simply wanted to deliver a sweater to her son in case it rained.

After going off to college 3,000 miles away where he majored in music, Adam began getting a slew of strange postcards, cryptic notes, and sometimes wordless letters, carrying random admonishments, bizarre accusations, and often funny life tips—though perhaps not funny at the time. Adam’s resultant compilation of these pulpy treasures now provides hours of endless entertainment for the rest of us.

Sadly, for Adam, interaction with his mother didn’t remain on paper for long. After he was in a fairly serious car accident, Mrs. Chester did what any mother would do: She flew out to care for her son; however, it was done in the way that only “Adam’s mom” could do it—she installed herself in his dorm room. With his roommates. For months.

Luckily for Adam, his mother was not the sum total of his existence; he still managed to have a few high points in life: including a video debut on MTV and as the piano-playing stand-in for Elton John (his childhood idol) concert rehearsals.

Now happily married with two children, Adam and his wife can cling to each other as they nervously laugh about the past, while holding on to their one hope for the future—that the senior Mrs. Chester never learns how to text.