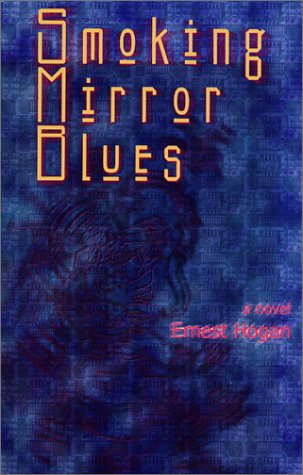 Welcome to futuristic Los Angeles, or El Lay as it is called, home of graffiti and smog. The inhabitants of this city are gearing up to celebrate Dead Daze, a weird amalgam of Halloween, Mardi Gras, and the Mexican Day of the Dead. Against this strange backdrop, Chicano author Ernest Hogan paints a strange world full of corporate-sponsored gangs, a new drug called Fun, the first African American president, instant access to information, and a revived Aztec god out to rule the world. Ernest Hogan welcomes you to this L.A. in his novel, Smoking Mirror Blues.
Beto Orozco, a hacker and game designer, resurrects the Aztec trickster god Tezcatlipoca, the Mirror that Smokes, in an A.I. version. But things quickly get out of hand when the god program takes control of Beto’s body. Now existing both inside Beto’s computer and his body, Tezcatlipoca sets out on his old trickster ways. Meanwhile, Beto’s girlfriend Phoebe Graziano, jilted when he blows off Dead Daze with her to run his program, runs off to the loving arms of her friend Caldonia. And in Mexico City, Beto’s friend Xochitl Eucharren, who designed the god-simulating program used by Beto, flees from the Earth Angels, a radical group of religious terrorists who want to use the program for their own ends.

There are other players as well, such as Ralph Norton, Beto’s partner on a game they’re designing, sent to L.A. to find Beto. And last but not least, we have Tan Tien and Zobob Delvaux of Ti-Yong/Hoodoo Investigations, a duo determined to get to the bottom of the Tezcatlipoca phenomenon sweeping through the mediasphere, Hogan’s future version of the Internet. These three eventually hook up and try to figure out how to stop the digitized deity.

Tezcatlipoca, by way of Beto’s body, quickly runs amok. Now calling himself Smokey Espejo, he immediately comes to the attention of Dead Daze revelers and the media when he kills a gang leader who accuses him of wearing outdated clothing. Smokey becomes the gang’s new leader, joins a band, and starts a new cultural phenomenon—and that’s just for starters. There is still one more day of Dead Daze left, and the craziness that follows will keep readers turning pages to find out what happens next.

Smoking Mirror Blues hits the ground running, shifting to different viewpoints every paragraph or so, generating and maintaining tension. With such a large cast of characters, one would expect things to get confusing, but Hogan manages the ensemble well. Everyone has their role to play, and it’s never a chore figuring out who is doing what. Each character is fleshed out just enough. You don’t get their entire life stories, but they aren’t cliches either. And, because it moves in short spurts and weighs in at only 209 pages, it could easily be read in one sitting. If Harlan Ellison and William Burroughs had sat down to collaborate, this is the kind of book they would have written.

Hogan’s knowledge of Aztec mythology and culture shines through in this work. This is fascinating stuff, especially if you’re tired of the same old Greek mythology that is such a huge part of the Western literary canon that serious readers know it by rote. His Los Angeles is a vivid portrait of where the city could be in ten years or so, and in some ways, reflects where we all are right now. Our worship of cultural icons, our love of fashion and violence— it’s all right here. And Hogan doesn’t waste time describing the machinery of this world. All of the cyberpunk trappings are there: wrist phones, instant information via the mediasphere, but none of the technophilic obsession with flashy gadgetry that characterizes most cyberpunk. This is post-cyberpunk at its zaniest.

Hogan’s style is very visual. There is a lot of frenetic action with people running into each other, and snippets from live newscasts detailing events. There are touches of erotica here too, which might offend some longtime SF readers, but if you’re tired of cyberpunk and looking for something new and different, or just want to read something wacky with a little edge to it, then Smoking Mirror Blues is a book you should be reading right now.