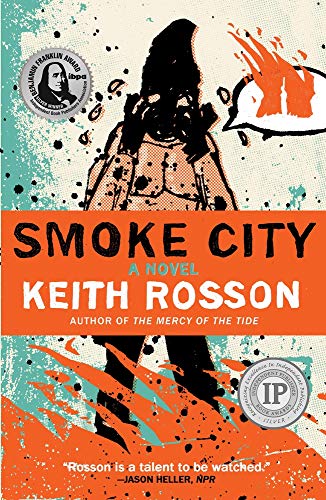 Ghosts have begun appearing on the west coast, specifically in the California area.

“Dim, but recognizable, a wavering form in the shape of a man. The figure staggered, gazing around the terrain as if lost, and then it disappeared. Vanished.”

No one can explain the phenomenon.

Into this scene come three men, almost strangers, carpooling from Portland to Los Angeles. Mike Vale was once a famous artist, “a relentless avatar of our contemporary, post-nuclear unease.” He was one of the most renowned contemporary artists in America. Now he works at a taco joint, when he’s sober. He’s sold the last of his painting to get money to travel to L.A. for his ex-wife’s funeral. He loved Candice Hessler, hates himself for the way he treated her and that’s one of the reasons he drinks.

“Did I ever know you at all? Did I ever let you know me?  If I didn’t know you, how is it that I’m losing you so ferociously now? So fiercely?”

Marvin Dietz’s story is unbelievable. He’s 600 years old, the reincarnation of Geoffroy Thérage, executioner of Joan of Arc. Marvin never lives past his 57th birthday, always dying, then being born again. That is his curse. He’s seen a woman on television who says she’s the reincarnation of Joan. If he can speak to her, perhaps he can be forgiven for putting to death a woman who was touched by God.

“My birthday was in a week but I’d be dead before then. Some terrible death in the next seven days. And then on to the next life. So it had been, so it would be.  It was hard to get excited about much. I was hanging on fiercely to the skin of the world.”

Otherwise, it’s back to Portland and an involuntary commitment to a mental hospital.

Casper is a stowaway in Mike’s van. He wants to go to L.A. to make a documentary about the smokes, as the ghosts are called. He has no idea the trip is going to change not only his life but Mike’s and Marvin’s forever.

“I want to do a show about the ghosts. Reality show. Specter Detectives. I’ve got the whole thing planned out.”

The problem is, he forgot his camera.

When the three get to Los Angeles, nothing happens as it should. Disappointments loom for all. Mike’s belligerence gets him arrested, causing a postponement of Candice’s funeral. He sees her ghost, but, like all the others, she can’t see him. Marvin meets the woman who says she’s Joan and learns to his despair she’s a fraud.

“What did I want to know? This was the crux of the matter, wasn’t it? What, after everything, did I want to know?  Countless lives lived, all of them weighted in some measure of pointless heartbreak and hurt. Wandering lost down the backbone of six centuries, searching for meaning. For penance.”

But there may be a ray of hope after all.

Marvin learns he can talk to the ghosts. He, and only he, is able to hear them, to guide them on their way. Perhaps this is his redemption. Suddenly, he wants to live.

“The ghost ratcheted its fogged and shaggy head toward him. “Oh,” it breathed, its voice like a sheet of glass scoured with grit. It held out its hands to Marvin.

Vale remembered Candice standing in front of the doorway of her house gingerly navigating her way through the darkness. But this? The look on the specter’s face was recognition."

And then a man with a pistol appears, a real man, and not a specter, and Marvin may get a redemption he doesn’t want.

Alternating between Marvin’s point of view, through his diary as well as his narration, and the omniscient observation of Mike’s life, Smoke City is a poignant tale of a quest for forgiveness tinged with black humor.

It’s an easy ready and the characters, while seemingly mad and occasionally violent, are surprisingly likable. The readers will want them to succeed in their struggles, hoping for a happy ending even as they admit the odds are against them.

The three start out as strangers brought together through necessity and a single goal: to get to L.A. They end up as friends, close and caring for one another, something none has had in many years. Through the struggle of their journey, the admission of their growing closeness, their lives are transformed for the better, because in a way each now has someone to care for.

Keith Rosson has a remarkable talent. He’s created an enjoyable story, an offbeat, occasionally absurd but haunting tale of life, death, heartbreak, and ultimately, redemption—if not in the way expected.