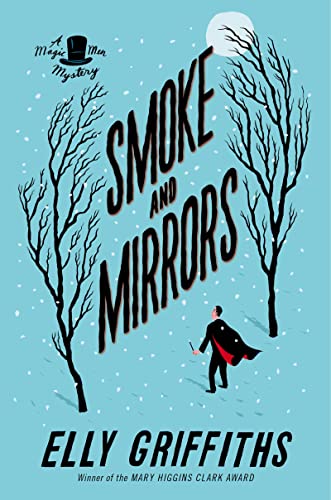 Set in Brighton at Christmas time, Smoke and Mirrors by Elly Griffiths spins a tale of murder, theatrical magic tricks, and some very grim fairy tales.

In retrospect 1951 is seen as time of innocence, which only demonstrates how deceptive nostalgia can be. DI Edgar Stephens of the Brighton police would be astounded by such a sentiment. As a soldier in WWII and now a police officer, Edgar has not witnessed much innocence.

Take for instance this case. Two missing children: Mark Webster, age 12, and Annie Francis, age 13, gone from their homes for more than 40 hours.

After directing the younger neighborhood children in a play she has written, Annie and her best friend Mark walk to the corner shop for sweets. Only they never arrive, according to Mr. Gee, the shop owner, and no one has seen them since.

Edgar hoped Annie was alive as he interviews her mother. “He had never dealt with a case involving a dead child and he didn’t want to start now.” But 40 hours! Where are they? It is snowing and very cold. Where have they found shelter?

He sends Sargeants Bob Willis and Emma Holmes to do another house to house search. Someone has to have seem the children. They couldn’t have just vanished like subjects of a magic trick.

Also in Brighton for the Christmas season is Max Mephisto, one of Edgar’s closest friends and a magician. He plays the villain in a stage production of Aladdin at a local theater, not a role he relishes, but work is thin on the ground. If television catches on in England as it has in America, theater variety shows will disappear, and then where all the actors be?

Annie is also absorbed in the theater. When Emma and Bob interview Annie’s sister, Betty, they learn that Annie’s play the children had been rehearsing the evening Annie and Mark disappeared is a dark and grim story. Called The Stolen Children, the play tells the story of two children stolen by the Witch Man. Instead of the Witch Man killing the children, it is their own parents.

When Edgar interviews Annie’s grandparents, they tell him about “Uncle Brian” Baxter, an elderly widower with whom Annie liked to spend time. Sure that he now has a lead, Edgar races to the honorary uncle’s home. Uncle Brian is not at all what Edgar expects.

“The man who answers the door was not the seedy monster who had begun to grow in Edgar’s imagination but an eminently respectable-looking man in a blazer and tie.”

Brian Baxter explains that he knows Annie and Mark, because he has converted his garage into a theater where Annie presents her plays. Parents and certain of Annie’s teachers are aware of his theater and attend the plays. Edgar believes his story.

Then the children are found beside a footpath, strangled and partially covered by the snow. A trail of sweets led to the bodies. Edgar is remained of Hansel and Gretal, two children who leave a trail of bread crumbs so they could find their way home after their father leaves them in the forest.

One of Annie’s teachers, Miss Daphne Young, who encouraged the teenager in her writing, provides a copy of Grimm’s Fairy Tales as a source material. Emma reads a play by Annie based on Snow White that Miss Young gives her. Instead of a wicked stepmother, it is Snow White who plans to kill her stepmother. “Children’s imaginations are dark, Sergeant Holmes,” Miss Young tells Emma.

Edgar sees something theatrical about the arrangement of the bodies with the trail of sweets. When he learns that the actors from the cast of Aladdin visited both Annie’s and Mark’s schools, Edgar interviews them. He learns of a girl actress who was murdered in a theater setting, and several members of the Aladdin cast had knowledge of the previous case.

But that murderer had been caught and executed in 1913, so unless he had returned from the dead, that case had nothing to do with Edgar’s. Still he can’t ignore the theatrical feeling of the two cases. Finally he asks Max his opinion.

Smoke and mirrors and misdirection lead Edgar and Max first one way, then another. Miss Young leaves a note at Edgar’s flat claiming that “I think I’ve discovered something about Annie and Mark. I think it may be important.”

Whatever Miss Young discovered, she took to her grave, as the strangler visited her before Edgar. What did she know, and how did the murderer learn of it? And why does the story of Han the Hedgehog keep teasing at Edgar’s mind?

Smoke and Mirrors by Elly Griffiths is one of those interesting, entertaining mysteries with likeable characters—most of them anyway—believable plot, and an uncommon setting. There are not that many mysteries set in Brighton in the 1950s.

Griffiths includes enough touches of 50s history, the advent of TV being one, to make the period come alive. All in all, Smoke and Mirrors is good bedtime reading: not quite a cozy, but not darkly realistic enough to disturb your dreams. It earns at least four out of five stars.