Smoke and Ashes: A Novel 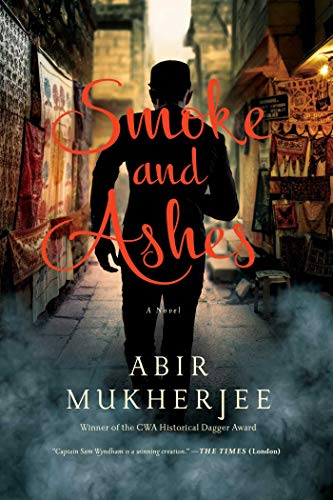 “Mukherjee has created two appealing characters presenting different factions of the whole that is India, revealing what each gives up to serve king and country, and answers the question of which country each actually serves.”

Captain Sam Wyndham of the Calcutta police has his griefs, driving him to seek the solace of opium in order to forget. He’s also attempted to cure himself of his addiction though he still has setbacks. On one of those nights, he’s in an opium den when it’s raided by Vice Division of the Imperial Police Force. Wyndham escapes but in the process discovers a dead body, a Chinese man stabbed to death.

To his amazement, in the reports about the raid, no mention is made of a corpse being found. Sam wonders . . . why hide this fact?

He soon has other worries, when another man is killed, this one a prominent physician, in the same way as the Chinese man. Can the two deaths be connected?

Wyndham and his partner “Surrender-Not” Bannerjee find themselves weighed down with responsibilities. In an attempt to offset the passive aggression of Mohandus Ghandi’s teachings as the native Indians demand independence for their country. The Prince of Wales is coming to Calcutta on a good will tour. A rally and a sit-in is planned, blocking the way of the prince’s motorcade. Not only a good many Indians will be involved but also Bannerjee’s family, who are prominent in Indian society.

“In normal circumstances, if you broke the law, you went to jail. Ghandi and his acolytes wanted to be thrown into jail, to show that the threat of prison and British justice meant nothing. To them, incarceration was a moral victory and we were placed in the bizarre situation of doing our best to keep them out of prison without acknowledging what a farce this was.”

Wyndham witnesses an earlier rally, in which both sides know exactly what the other will do and treat it as a somewhat deadly game of manners.

“The fact that the demonstration was illegal had been conveniently overlooked by all concerned. The whole thing felt like a game where both parties agreed which rules applied and which didn’t. Rules are important. You can’t play the game without them and the Indians loved rules as much as we did. All we had to do was sit and wait.”

Still investigating the murders while attempting to dissuade Ghandi’s top lieutenants to postpone their rally or at least move it to another location, Wyndham discovers some shocking facts that connect the deaths to the rallies in a way meaning death to many innocent people, including the prince as well as Ghandi’s followers. His superiors won’t listen, they believe His Majesty’s forces can overcome anything, but Sam isn’t so certain because he has learned the killer is one of their own.

It's up to Wyndham and Bannerjee to save the prince, stop the sit-in, and find the killer before he adds a member of the royal family and a good many of Calcutta’s population to his list of victims.

“In less than an hour, the Prince of Wales will speak at town hall. The Congress will make their way there to protest. The time of maximum danger will be when the prince is about to leave, coming into close proximity with the protesters.”

“Do you think he’ll seek to kill Indians, too?”

“I doubt he’ll care about Indian casualties any more than he will British ones."

India is another area about which a good many people will admit they know little or nothing, Bollywood notwithstanding. Setting this novel during the dramatic time of Ghandi’s crusade for Indian independence gives us not only a view from both English and native standpoints as to what went on, but also shows the behind-the-scenes struggles of specific individuals.

In Wyndham and Bannerjee, Mukherjee has created two appealing characters presenting different factions of the whole that is India, revealing what each gives up to serve king and country, and answers the question of which country each actually serves.  What little most of the US may know of this era is further enlarged by the background revealed as Wyndham struggles to prevent the tragedy about to happen.

The background descriptions of the cityside where Wyndham does his investigations as well as the attitude of those in authority toward those native to the land is also explored, and the atrocity committed following the Great War, which brings about the murders is discovered through an exceptional bit of detecting on the captain’s part.

An interesting story, with two remarkable characters, which will make the reader seek out the other novels in this series while asking for more.