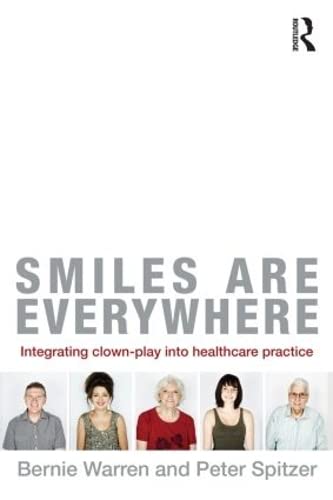 At first Smiles Are Everywhere: Integrating Clown-Play into Healthcare Practices appears to be a satire on how clinicians are forced to put on the happy mask as their patient loads are ever increasing and in many cases incomes remain flat or are decreasing, with the continued boiling point of the soup which is the U.S. healthcare system.

But the text was written by the heir of a Canadian doctor and a practitioner from Australia—both countries with national health care—so the work environment being examined is probably less hectic than that faced by American doctors.

Because this book is a mere 145 pages—most of the text consists of charts on how to make finger puppets, glove balloons, and clown tricks—makes it more of a pamphlet or booklet than a book. The gist of this breezy booklet is that imitating happiness can actually improve the work environment in health care for both the staff and the patients. Of note are the examples of the “massage train” for who doesn’t love a good should massage. Apparently there has been a decade of research work in Canada on the effects of humor on healing.

Smiles Are Everywhere reveals that clowns (called fools) were used by the ancient Greeks to influence healing of the sick. Perhaps Mr. Warren and Mr. Spitzer can deploy some of that happy go luck humor for those waiting online for their web application to be processed so they can get some health insurance through the healthcare exchanges of Obamacare.

Smiles Are Everywhere is filled with trade secrets for clowning, including tips for enlightened male clinicians to don happy work attire such as a dashing fedora, bright colored clothes like the garish burnt orange scrub pants that are so popular now, and attention getting humor-eliciting accessories. All this appears in the first 33 pages of the text, so the impatient reader can waltz through the charts that comprise the rest of this “study.”

This book is recommended for oddballs, depressives, and for those seeking grant money for some obscure behavioral study. Amazon’s list price of $113.98 for the hardcover version of this book should elicit a hearty guffaw or two. Maybe the charts in the hardcover come in color.