Smile: How Young Charlie Chaplin Taught the World to Laugh (and Cry) 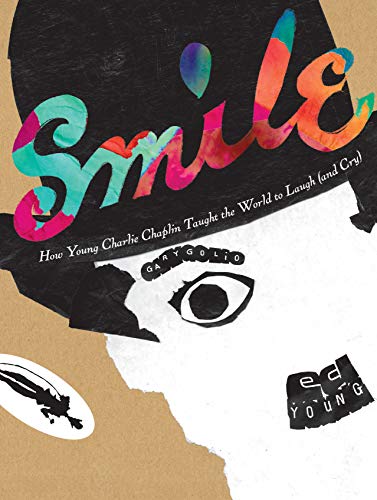 "And Charlie began to understand

How Funny and Sad went hand in hand."

Movies did not always have sound. Before 1927, films were silent. One deduced the story solely by the actions of the performers. Charlie Chaplin was a master of the silent film. He could make people cry and laugh at the same time. He was a tramp, a gentleman, a scientist or musician. He made us feel that it was all right to laugh at ourselves. In fact, he was us.

But Charlie didn't start out to be an actor. His mother was a singer who became mentally ill and could no longer support Charlie and his brother Sydney. His father was an alcoholic who left his family to fend for themselves. The boys were sent to workhouses and lived in dire circumstances. Although he was lonely, Charlie managed to turn his tears into a smile.

He roamed the London streets and observed happy children, men with bowler hats and a flower seller. "Sometimes he danced for pennies . . . where a sad face and two happy feet earned him enough for a toasted tea cake with jam." He remembered an earlier life with housemaids and sweetcakes. The day his mum quit singing, Charlie took her place. He sang and danced in front of an audience that roared with laughter and showered him with gold coins. He realized he could perform to supplement their income.

Charlie was determined to keep his audience smiling. At nine he joined a theater troupe for boys. When he pretended to pee on the curtain, the audience howled. But the manager scowled. "It was worth getting yelled at to make people smile." He spent his days watching the other actors. He mimicked a young boy with a wobbly walk and a crooked cane. His mum laughed but thought that this boy was sad. "And Charlie began to understand How Funny and Sad went hand in hand."

Finally, he landed a part in a play. Critics and audiences loved him. He found he could make people squeal with delight just by stumbling or falling down. "With his deep blue eyes, he'd hypnotize. With his body, he'd tell stories." He discovered that tears and laughter were brothers when the spectators laughed until they cried.

It was hard to believe that this funny clown who made people laugh during the day was lonely and sad in the evenings. He eventually made his way to Hollywood and began to act in silent films. He glued on a mustache, wore a bowler hat, carried a crooked cane, and had a wobbly walk. "The Little Tramp" was born. Flip all the pages and the tiny silhouette of the tramp at the bottom right-hand corner on each page will wave at you. Please wave back with a smile.

This biography of an icon of the silent film will charm its readers with the exquisite, colorful ink and torn-paper collage images and its lyrical text.