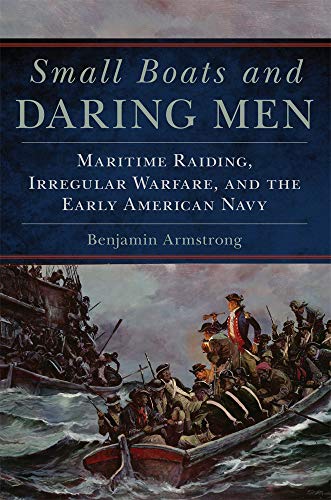 “a groundbreaking examination of an untapped subject in early American naval history . . .”

In Small Boats and Daring Men, Professor Armstrong provides a groundbreaking examination of an untapped subject in early American naval history. Traditional histories of the U.S. Navy in the Age of Sail have primarily focused on the gallant ship-to-ship duels fought during the Revolution or the War of 1812. Others have focused on battles fought on America’s shores or lakes.

However, as his introduction notes, the typical historiography of this era has overlooked an important component of America’s early naval operations—what Armstrong calls guerre de razzia or war by raiding, or to use another term of his: irregular naval warfare. These types of naval operations: ship-to-shore raids and operations by shallow draft vessels in coastal or inland waters were much more common during this era than traditional fleet actions.

Armstrong uses a selection of case studies to highlight both the nature of these operations, and an after-action analysis on why these particular missions were successful or, in some cases, not so successful.

He begins with a lesser known action by John Paul Jones, America’s first naval hero. Jones’ 1778 expedition to raid towns and harbors along the coast of the British Isles was the first landing on British home soil by Americans during the Revolution and had an outsized strategic and moral effect on the British war effort. Although the actual tactical results of his actions were small compared to the war overall, the public outcry resulting from the raids forced the British to divert significant military and naval forces to secure the British coastline.

The most operationally significant irregular actions of this era probably occurred during the War of 1812, and these are the most diverse and interesting actions of the book. The more well-known Battles of Lake Eire and Lake Champlain were each materially affected by raids conducted by American navy, army, militia, and even allied natives seeking to capture or destroy British naval vessels and supplies. The actual balance of naval power on Lake Eire was changed when American raiders captured the vessels Detroit and Caledonia, burning the Detroit during their escape to prevent its recapture and incorporating the Caledonia into the American lake fleet later commanded by Oliver Hazard Perry.

Unable to raise the blockade of America’s coast by the hegemonic British Royal Navy, irregular warfare during this era also went high-tech when Robert Fulton, inventor of America’s first steamboat, along with other intrepid American inventors, attempted to create the world’s first floating mines, called torpedoes during this era, to overcome the deficiency in traditional American naval power.

Although these weapons were ultimately unsuccessful and did not sink any British ships, they did change the operational patterns of some blockading vessels and paved the way for future versions of this weapon that were later used in the American Civil War.

The chapters on the actions against Sumatran pirates in the 1830s not only show the successful joint operations of regular and irregular naval forces, but also the unique role that a naval squadron played during this period of extremely slow global communications, when naval officers were forced to become de facto ambassadors in remote regions of the world. A formidable naval commander was able to use both hard and soft power to represent the interests of the United States, and as this case study shows, it often took equal measures of both to suppress pirates and brigands.

Professor Armstrong makes the salient point that the study of these historical events has continued lessons for today’s naval warfare. Naval officers who conducted riverine patrols along the Tigris and Euphrates Rivers in Iraq, or who conducted anti-piracy patrols off the coast of Somalia would find his chapters on the Barbary Wars or Sumatra eerily familiar. Even the raiding actions of John Paul Jones echo down to the missions of today’s Navy SEALs in places like Iraq and Somalia.

Somewhat disappointingly, given the range and scope of the actions in the book, there are no maps at all, which would have been particularly helpful in orienting the actions along the Great Lakes, geographic features critical to understanding America’s early wars with Great Britain over control of Canada.

Overall, this book does an excellent job of not only illuminating a previously overlooked aspect of the early operational history of the U.S. Navy, it shows the remarkable continuity of irregular warfare and shows the need for a modern navy to maintain the unique capabilities for conducting guerre de razzia—combining large blue water ships and weaponry with vessels suited for the challenging littoral, coastal, and inland waters where future conflicts are likely to occur.