A Small Affair: A Novel 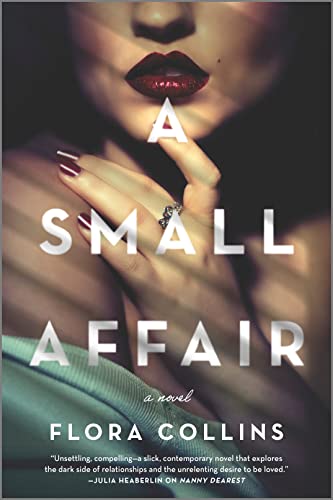 “This story carries a good premise but is difficult to follow.”

To say that Flora Collins’ book, A Small Affair, is difficult reading would be an understatement.

Protagonist Vera McDonald is an uber-successful woman in New York’s fashion world. She claims to be the one reason her boss, Huda, is so successful and yet at the height of her achievements, the world collapses under her.

Through a dating app she finds Tom Newburn, a super handsome, prosperous, wealthy man whom she dates three times. He claims to be mid-divorce, with one child, but on the third date Vera overhears him in a nasty conversation with his soon-to-be ex, and Vera does not like the way he talks to her, so Vera dumps him.

After countless texts to her, Tom realizes the affair is over. The next thing we know, Tom kills his wife and their unborn child, and then himself. Through social media, the affair is made public, and Vera becomes the subject of hate mail and endless chasing by the paparazzi. Vera sees this as, “Of course, logical people and decent media outlets didn’t blame me . . . the people most fascinated by the story were the ones who wanted to assign me the role of villainess, who needed a living scapegoat.”

Vera loses her job and hits bottom quickly. She leaves her apartment and her long time roommate, Quinn, a gay man who is the only good character in the entire story, and she moves in with her mother, an aging vegan hippie.

Angry and hurt and feeling betrayed, Vera determines to clear her name and begins the hunt.

Now, this premise is really a good one, the problem is the way the story is laid out.

All of the characters are beautiful, handsome, wealthy or at least on the way. First, Vera is self-centered and arrogant throughout the entire story, and it is difficult to feel sorry for her or to cheer for a successful comeback. “Other women usually became catty or jealous of me, because of my personality or looks or ambition, who knows. . . . For all my streetwise knowledge, my self-defense skills, it didn’t matter. I wanted what I wanted in those moments and I devoured it, without a second thought.” This self-aggrandizement continues throughout the story.

Odilie, Tom’s wife, enters the story as a shy wallflower type until Peri, a mysterious woman takes Odilie under her wing and redesigns Odilie. “[Odilie] had never heard someone talk about death so openly, so defiantly, as Peri. It was frightening; it was intoxicating . . . she hung onto . . . every word of Peri’s life story like it was scripture.”

Peri is Tom’s girlfriend, mysterious and sexually adept, who introduces Odilie to Tom. Tom and Odilie get married and soon it is learned that Tom is overpowering and mentally abusive.

Third, and very important, the story moves from Vera’s first-person, present tense tale in today’s world to ten years ago, third-person past tense with Tom’s wife Odilie; to one year ago after the deaths, and ad infinitum through the entire book—it’s difficult to know where one is in the story. It’s hard to follow the story without a score card.

Collins identifies some chapters with headings One year ago, Present; Odilie Ten Years Ago; Vera, and there are some chapters with no headings at all. The titles, when they appear, bounce around with little or no pattern. One assumes that an untitled chapter follows the previous one that has a title, but that does not prove true in all instances.

And if it is not confusing enough, the story is also divided into Parts. If the reader can stay with the story as it unfolds—backward, forward, and way backward—Collins ties up the many loose ends, although perhaps not as satisfactorily as one would wish.

As mentioned above, this story carries a good premise but is difficult to follow.