Small Acts of Defiance: A Novel of WWII and Paris 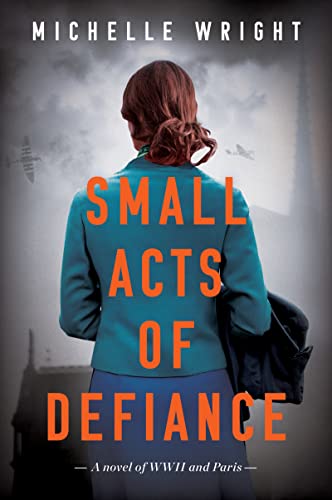 In January 1940, 16-year-old Lucie and her mother, Yvonne, leave Australia after their home is destroyed by a fire where Lucie's father has perished. Gerard, Yvonne's brother, is their only family, and he offers to take them in, so a four-week-long ocean voyage brings them to Paris. Once well-to-do, Gerard has been forced to sell some of his many properties due to the unrest in Europe, yet he is able to retain his furniture moving business and has enough space in his small apartment to house his sister and niece.

Yvonne and Gerard have not seen each other in years, and Lucie, never having met him, is intimidated by his standoffish attitude toward her. Yvonne explains her brother never recovered from the loss of his wife and baby during childbirth, which she hopes clarifies his demeanor. Lucie wonders if he finsd them intrusive in his life, even though he offered to accommodate them.

Lucie finds adjusting to her new home challenging, and she spends her days walking around the area sketching pictures. She always folds them in fourths and sequesters them nearby, hoping whoever discovers them will enjoy them.

When the German occupation increases in strength, Gerard insists they leave Paris and flee to Bordeaux, where he assures them they will be safe. Others feel the same, causing a significant exodus out of the city. On their way south, they encounter several dead bodies and destroyed buildings, the results of the many bombings.

After several months, they are able to return, and Yvonne finds gainful employment. Lucie is bored hanging out in the apartment and does not want to be there when Gerard is present. Yet she is somewhat fearful walking around Paris while the German soldiers patrol the streets.

One day on a walk with her mother, they pass an art supply store with a help wanted sign in the window. Yvonne suggests Lucie apply for the job, knowing her daughter is talented, but Lucie does not believe she is worthy and lacks in her skills and knowledge of art. However, she later heads to the shop and meets Margot, the proprietress, who offers her tea. They discuss drawing, and Margot asks Lucie to sketch her. Upon seeing Lucie's work, she hires her to produce pictures of Paris. The offer of a job and supplies excites Lucie and allows her to share some of her earnings with Gerard in return for room and board.

When she returns to Margot's shop, producing several postcards she's drawn, she is introduced to an older gentleman named Samuel, a university professor and silversmith. He invites her to his business, where his family has worked as silversmiths for generations. Taken in by Samuel's charisma, she looks upon him as a grandfatherly figure. Arriving at the address he supplies, she is surprised to see a sign over the door, written in German and French, branding it as a Jewish establishment.

Lucie comments: "'I don't understand why they're doing this,' she said. 'It feels like they're trying to punish you. You've been in France for years.'

"'Lucie,' he replied, 'you're new here, but believe me, this country has a long history of anti-Semitism.'

"Lucie had never heard that term before, but she could guess what it meant. She remembered the priest in the Catholic church in Wonthaggi [Australia] blaming the Jews for the death of Jesus.'

As Samuel explains the atrocities, she says, "'I had no idea they could do such a thing. At home, we were taught that France was the country of freedom, of equality.'

"'Oh, my poor Lucie,' he said. 'I think there's a lot you still have to learn about human nature and about the French.’"

Lucie soon meets Samuel's granddaughter, Aline, and the two instantly bond. Aline is an activist, and Lucie is in awe of her tenacity and determination. Before long, she decides to band with her so she can help the Resistance. Her postcards are the perfect solution, for she manages to encrypt codes in her drawings to alert the French to stand up against the Germans.

Things become difficult with Gerard, a staunch supporter of the German occupation, who believes the Jewish people are out to destroy France. Lucie cannot understand how he can be so short-sighted and decides to confront him when he sounds off. Though Yvonne tries not to rock the boat, for they live under Gerard's roof, when he becomes nasty to Lucie, she finally speaks up and joins in to aid those targeted.

This debut novel, though fiction, is taken from facts and recounts more than four years of the German regime trying to eradicate the Jewish population in France. The city of Paris is described in infinite detail as well as the many characters involved. Trust in fellow man is absent, and fear of one's life and livelihood abounds. Several accounts are included in this book relating to the title, which adds credence as to why it was named as such.

This is a chilling tale about a populace so prejudiced against a group of people they know nothing about but want to eliminate due to their differing religious beliefs. One would think the sins committed in the past would teach future generations not to be replicated. However, it is

heartwarming to know some still have empathy for the underdog and want to help even though they put their own lives in danger. Still, as long as prejudice and distrust are prevalent, history will continue to repeat itself, and stories like this will continue to be written.