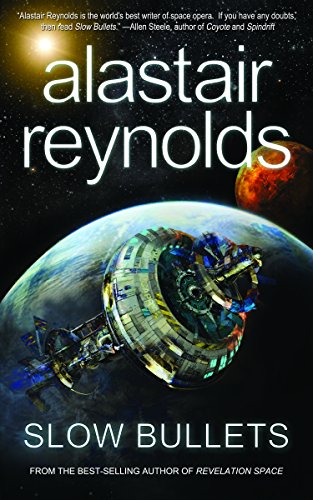 In Slow Bullets, a war between hundreds of worlds appears to be at an end. But a conscripted soldier named Scur is captured and tortured by a war criminal named Orvin. Before his torture is completed, Orvin injects Scur with a “slow bullet,” which will gradually work its way to through her internal organs to her heart, where it will kill her. He leaves her to die on a desolate planet.

Scur is revived aboard a massive old space passenger ship called the Caprice. The ship’s dying computer awakens thousands of soldiers from both sides who had been forced into an unnaturally long hibernation. Almost all of them, like Scur, have a slow bullet embedded in their bodies. Memories implanted within the slow bullets are their only connection with past lives on various planets. They find themselves fighting over worlds long gone and a war that had ended.

Scur befriends a lone surviving crewmember who can manipulate the ship’s systems and its computer. They and a small group of similar-minded survivors attempt to maintain peace among the warring soldiers.

They orbit a planet whose glorious past has been obliterated by years of war and destructive climate change. A survivor from the surface boards via a one-way rocket to the orbiting ship. Together, they try to find a way to save the dying ship, maintain peace, and survive. When Scur discovers Orvin, her old enemy, the stakes are much higher.

Scur focuses on her loving family, although they had certainly perished centuries ago. Now she must find a way to create harmony on a ship filled with antagonistic soldiers who had been attacking each other before hibernation. She learns that dealing with old enemies is much more difficult than the war itself.

Alastair Reynolds weaves a tapestry of dark, dystopian societies in a tense, colorful narrative. His plot is bold and striking, as he elicits the cold, empty death awaiting everyone who cannot find a way to coexist and survive.