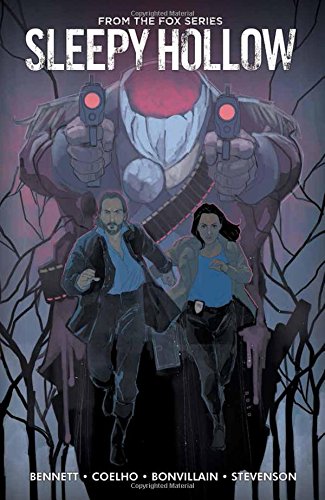 Fans of the Sleepy Hollow movie should beware buying this graphic novel based off the Fox series. While other readers have found that this graphic novel is a tie-in to the series Sleepy Hollow as a continuation of the first season, people who have not watched the show at all will be confused by the storyline: There is no explanations whatsoever for the relationships in the book, the characters, or the plot—it is assumed the reader already knows.

The illustrations and coloring are fine, there is nothing outstanding and nothing bad—they are simply up to par with any other commercial venture. Though Ichabod Crane is from another century, his dialogue is painful to read. The writers could have given him some initial flowery prose to suggest to the reader he doesn’t use modern-day syntax, etc. but then shortened his overlong rhapsodies to spare readers.

There are three chapters in this first volume that focus on Crane, a consultant with the police force, and his police partner Lt. Abbie Mills, who continues to show him the modern world and indulge his sweet tooth. In fact, Crane’s sweet tooth, and his annoying speech patterns, are the only things that mark him as a stand-out character. Lt. Mills, though a female of color, is a flat character—there are no visible quirks or traits about her, nor for any of the other characters introduced.

The plots in this volume (a collection of the first three issues digitally released) center around the Fox series stories that gives characters supernatural powers with a consequence and the return to the story of Hessians, in particular one known as a madman, who uses music and machinery to lure people to their individual hells where they must escape. The stories in this volume are short, and though they are imaginative, they are also strangely dull with lackluster illustrations. Unless readers are avid watchers of the Fox series, this slim volume is not a worthwhile investment of time.