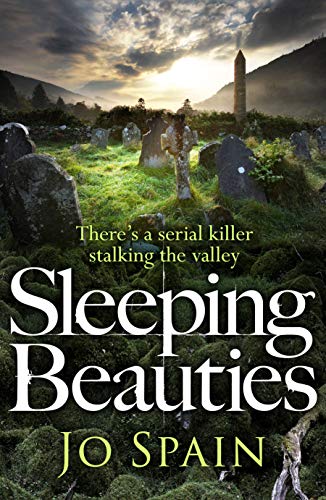 “Spain lays out a good story plot and every clue follows a path to the end of the story with no deviations, no short cuts, just good detective work.”

Fiona Holland has gone missing and the question is whether she has run away or was she kidnapped. The local police settle on the first first question—certain that she will return. She is, after all, a difficult young woman with a reputation.

Tie this event in with a discovery of five graves at the visitor’s park at Glendalough, Ireland, and the questions and answers become a bit murkier.

In Sleeping Beauties, Jo Spain’s newest mystery in her Inspector Tom Reynolds series, the hunt for a serial killer takes on an urgent tone. If Fiona was kidnapped by this serial killer, can Reynolds and his team find her before she becomes the sixth victim?

Spain lays out a good story plot and every clue follows a path to the end of the story with no deviations, no short cuts, just good detective work. Her characters are well-developed and three dimensional with their own flaws and strengths.

As the search moves forward, Inspector Reynolds wrestles with his own demons, including a new boss who is more interested in his public face than solving crimes. Reynolds’ previous boss, retired Chief Superintendent Sean McGuinness, had encouraged Reynolds to apply for the job, but Tom wasn’t ready, and so the position was filled by Joe Kennedy who wants the current problem solved, regardless of who gets charged.

As the murder investigation continues, Reynolds consults McGuinness with frequency, while Sean’s personal life is a troubled one as well. Sean’s wife is wrestling with the effects of Alzheimer’s, and Reynolds finds his search for a serial killer battling with his desire to help his friend cope with the impending loss of his wife, both mentally and physically.

The characters around Tom Reynolds include his driver, Willie Callaghan; Detective Sergeant Ray Lennon; Sergeant Laura Brennan; Moya Chambers, Deputy State Pathologist; and Emmet McDonagh, Chief Superintendent of the Technical Bureau. Each of these characters brings his or her own complications to the team—difficulties that place bumps in the road to resolving the problem at hand—finding a serial killer. Spain also brings empathy, anger, and in some instances disbelief to the other characters—the police, the victims, their families, and friends.

As each victim is identified, Spain provides a background chapter regarding how she met her death, and while there are enough clues to build toward the conclusion, Spain does not give away too much. She keeps the killer’s identity close at hand.

As with all good mysteries, the author builds toward a climax that places one of the police characters in a life-threatening position, forcing the team to rethink their clues in order to find their coworker before another death occurs.

In addition, Spain takes the personal issues that each character faces and neatly builds them into the story, using them to lead toward a satisfactory ending.

This is a well plotted story and a fast read. The reader should plan to be pleasantly surprised at the ending and the discovery of the guilty party . . . or is it parties?