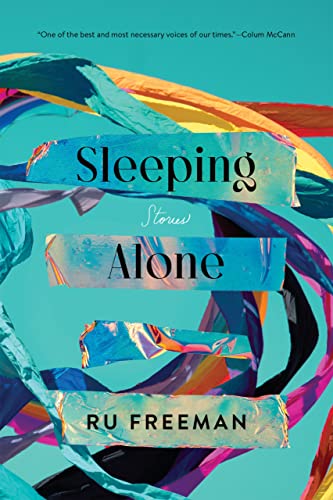 “In these stories, we inhabit the lives of the characters, yes, but the stories behind them also tell us about ourselves.”

Ru Freeman's novels, On Sal Mal Lane and A Disobedient Girl, are set in Sri Lanka where she grew up. In her novels, Freeman brings her country to readers who may know nothing about it, and familiarizes us with its culture and history through her vivid rendering of family life. In doing so, she becomes a bridge, especially for American readers, bringing the foreign to life in intimate ways. Sleeping Alone, her debut story collection, is set primarily in the States and brings us a wide cast of characters and their various stories, often in their own voices.

Anna Deveare Smith has said that if you listen carefully to a person's language, to the way they voice their stories, you can come to understand, viscerally, what it feels like to be them. Reading these stories, it is easy to imagine Freeman, as a story-hearer, head-tilted, empathetic, fully present to those slips of the tongue where a person's inner life is suddenly revealed. As a writer, she takes those flashes of insight and transforms them into characters we'll remember for a long time.

In the first story, "The Wake," Sylvia is a young girl whose mother brings "Agapito," the leader of a small cult, to their tiny apartment to die—and be resurrected, of course—because the room the girl shares with her brother is the only place "in which [Agapito] has felt the divine vibrancies in the whole of New York."

Sylvia, like all of Freeman's protagonists, is observant and skeptical and, like many of them, she is also subversive, hiding peanuts all over the bedroom in the hopes that Agapito has a nut allergy. She and her brother would like to hasten his death if that will also hasten his resurrection and thus lead to his vacating their family's abode. "He died again, this time for good, I think," her brother tells her, adding later that he has begun to smell. Of course, Sylvia also hopes for the repair of their parents' marriage, even though it seemed not the happiest of unions even before the advent of Agapito.

There are many unhappy unions in Sleeping Alone, but they are rarely the subject of the stories, and provide, instead, the emotional landscapes. What do we know of the narrator of "The Bridge" and his life? Only the little he will tell us. We know that his wife has left him, taking his daughters. We understand, eventually, that he was responsible for the death of a young woman, presumably in an act of war. This narrator does not tell us the story he cannot tell. He circles around it, instead telling us the story of "ordinary, mute, Sophie," his student who has found herself pregnant, her boyfriend a young soldier being sent off to war. The narrator's feelings of guilt, his need to make reparations, are somehow bound up with her and with his hopes for his own daughters, now fatherless. When we reach the end of the story and he embraces Sophie, holding on even though she stiffens and struggles against him, we don't know whether to feel relieved or disturbed. We do know the war has taken its toll and will continue to do so. "Hush, hush," the story ends.

What cannot be told? And what could be told if only we would listen? These are two essential questions this collection poses. In "Sleeping Alone" the protagonist is neither "heard" nor "seen" for who she is. Sameera tells us that her husband, a professor of Middle Eastern Studies "likes the color of my not-tanned-but-real-brown skin, my black hair, my preference for nose-rings and waist chains and anklets that make follow-me noise. They make me exotic, I make him interesting. Who can blame him for wanting that? A quarter century in academe could do that to a person make him want to possess something real from Over There. . . ."

Her husband, the expert, is not the only one who does not see her, does not listen. When Sameera suggests releasing kites for a celebration because it is traditional in parts of the Middle East, everyone involved agrees but she notes, "Nobody asked me the obvious. Which parts? Which villages? Why?" This willful ignorance of the "monolithic" Middle East, as the characters around her see it, is at the center of Sameera's disdain.

Sameera knows her husband shares her disdain "for his nation of fools, that he loves [her] nation of fools more passionately sometimes than [she does; their] only difference being that his version draws the line at doing something about his hates and his loves. [Hers] requires action. . ."  And so she lays a trap, even knowing she'll get caught. That her husband shares her disdain does not save him, which is perhaps the point. He has knowledge, but he does nothing with it.

These kinds of losses, from one's home, one's past loves and aspirations, one's self are everywhere. In "What Could Be Said about Pedris Road," the unnamed narrator is forced to see a therapist if she wants to see her children. Her only crime, she thinks, is being unhappy in her husband's country. As she remembers more and more, but tells her therapist less and less, we come to understand her deep love and longing for her home; we see how the fabric of that life gave her a way of being where she wasn't estranged from herself.

Boundaries and differences run through the stories, but so do love and the desire to connect. In "Retaining Walls," a building contractor senses the "textures of [his clients'] small history" and intuits their losses, but he also hopes that their grown daughter can see him for the man he is "beneath the work that he does."

In "The Irish Girl," an immigrant to Ireland says after 30 years, "I have learned how to kiss an Irish girl. But now I am too full of sadness. I understand this love, the half-life she has led, this guilt." And in "Fault Lines," narrated by three different women, each "dreams of purchases none of them will ever make. In their various beds, some hard, some soft, differently lonely, their children dream, too."

Sleeping Alone is dedicated to Freeman's three daughters. Her message to them and, by extension to readers, is "May you always find the stories behind the ones you hear." If in her novels, Freeman took the unfamiliar and made it familiar, in these stories, she often does the opposite. At least for readers from the US, she creates a kind of "cognitive estrangement," as Ursula Le Guin would say, and by doing so, transforms our familiar, gives us a new lens through which to look at our reality and our assumptions. In these stories, we inhabit the lives of the characters, yes, but the stories behind them also tell us about ourselves.

Beth Alvarado is the author of four books, including Anxious Attachments, winner of the 2020 Oregon Book Award for Creative Nonfiction, and Jillian in the Borderlands: A Cycle of Rather Dark Tales. She teaches for the Low Residency MFA Program at Oregon State University-Cascades.