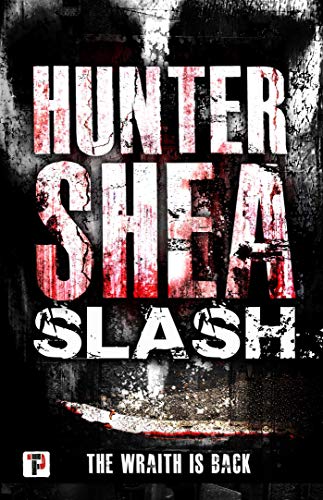 “A story surpassing in concept any slasher novel/film made thus far.”

A year after she becomes the sole survivor of a group massacre by an unknown assailant dubbed the Wraith, Ashley King takes her own life.

Ash was an urbex, an urban explorer. She and her friends broke into abandoned buildings, filming what they found. They made the mistake of choosing the deserted ruin of Hayden Resort, with terminal results.

“The Hayden resort was the center of the Catskill Borscht Belt, from its opening in the 1930s to the early seventies. Now, it looked like an afterthought, an abandoned experiment left in the dust of time.”

Friends say Ash died because she couldn’t rid her mind of those horrors. Her fiancé Todd says it’s because the public wouldn’t let her forget. Morbid curiosity seekers had made a cult of her—the Final Girl—taking pictures, leaving tributes, doing podcasts.

Months later, Todd finds a letter Ash left him in which she explains her decision to die. In it, she says she hid a memory card in the Resort to show what actually happened.

In two days, the Hayden is going to be demolished to make way for a housing development.

Todd has to find that recording, to understand what actually happened and why Ash chose to die rather than share his life.

“Was there a chance the Wraith was still lingering around the Hayden? Probably not. He might have been a psycho but he was smart enough not to stick around a crime scene.”

Going with Todd are his and Ash’s five best friends. None are urban explorers but they can’t let Todd go into that place alone. What neither they nor Todd know is that the Wraith isn’t what they, or even Ash, believes him to be.

Ash says she met a man who had a friend once working at the Hayden, a man confessing a terrible secret.

One night, the cook staff had their own party. After the alcohol started flowing, one of the cooks confessed he had been a guard at a Nazi concentration camp. Since many of the other employees at that time were Jewish and some had been incarcerated in camps, they retaliated by killing him and burying his body behind the resort’s swimming pool.

“The part that makes you realize this place is on bad ground.”

“No, like the kind of place that invites trouble. If this dude who survived a concentration camp had to write a confession, it’s bad.”

Ash believed the murdered guard came back. That he was the Wraith. Todd and his friends will learn that isn’t exactly the truth, not all of it, anyway.

This story starts off as a typical slasher novel. The first hint that it’s going to be different is when Todd learns of the murder of the former Nazi guard.

At that point, the story momentarily segues into something different, making the unwary reader believe it’s becoming a search for a fugitive Nazi, which would’ve made a great novel, too.

The killer may be a Nazi but he’s something more, something not even hinted at in the archives of the Reich—a zombie? An undead creature kept alive by magic?

Nazi zombies are nothing new. Cross reference Dead Snow, a Scandinavian film and one of the best on this subject. This theme would also have made a good story.

Once again, it doesn’t happen.

Hunter Shea could’ve stopped at that point, and the novel would’ve been good enough, but the author continues to pile on the horrors—supernatural onto magic, unbelievable onto myth—and the result is a story surpassing in concept any slasher novel/film made thus far.

However . . . as usual with these stories, he has fallen prey to that literary device now become a cliché—the open ending.

SPOILER ALERT: Just once, it’s wished when something is labeled “The End” it is truly The End and not an expectation that someday, more horrendous happenings will occur, that Evil has (once again) triumphed over Good though it currently looks otherwise.

Poor Todd got the short end of the stick, too.

Those two points aside (and they are very important ones when reading this novel), Slash is a well-written, well-characterized, very coherent but literarily visceral novel. The characterizations are good. These are people a reader can like, each and every one, and empathize with. The causes of the Wraith’s resurrection is logical within the Nazi preoccupation with the supernatural. The epilogue, consisting of five pages in which those offending clichés are housed, are outweighed by the rest of the novel of 274 pages of bloody terror and a determination to survive.

The final judgment: Read it!