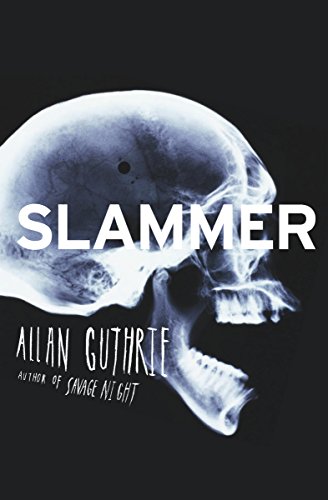 Read Slammer and you’ll feel a cold steel spike piercing your brain. You’ll feel your insides sucked out through your bellybutton. The images are Guthrie’s, and they illustrate the dark ride on which he leads readers in his latest thriller.

In this book, 22-year-old Nick Glass is a newly hired guard at a prison Guthrie calls “the Hilton.” But Nick is not really up to the job; he is weak, unable to make decisions or stand up for himself. Guthrie refers to Nick Glass’s “shattering.” The prisoners see Glass as an easy mark and ask him to bring in “gear” (drugs). Otherwise their homicidal outside contact will be visiting Glass’s wife Lorna and little girl Caitlin. How does Glass respond? I won’t let on. I’ll allow readers to enjoy and be terrified by Slammer in exactly the way Guthrie lays it out.

As the plot progresses on its dark, suspenseful, and jolting twists, Guthrie brings to life a cast of powerfully drawn characters who outshine Glass and underscore his weakness. Mafia, imprisoned for a horrifying murder, wears dark glasses, because he can’t see. (That doesn’t stop him from getting a good swing at Glass’s jaw, though.) The nickname Mafia comes from his wearing the dark glasses. Mafia and Glass are friends; he’s one of the few inmates Glass can talk to. Caesar is the leader of the inmates. He runs the drug-smuggling operation into the prison. He’s a muscular guy whose cellmate “Jasmine” is referred to as “she” and whose huge buddy Horse is constantly watching his back.

On the outside is Watt; he’s the drug connection as well as the thug who stalks Lorna and Caitlin. Watt is even more dangerous because of his envy of Glass. Watt’s own wife and daughter were murdered. Or were they? And, by the way, Watt is Mafia’s estranged brother.

Glass’s story unfolds in Guthrie’s concise, rapid-fire, twisted, terrifying, and often funny manner. Guthrie has his own style of humor, one mode being farce. For example, Nick Glass’s first attempt to be a hero finds him inadvertently running into the filming of a porn scene. Then there’s the gross humor. In an earlier Guthrie novel a character chops off two of a guy’s fingers and rams them . . . nevermind where . . . and throws him out into the street. What kind of mind thinks of that? But soon the reader will see the humor in the disgusting scene; it’s one of many darkly funny tricks Guthrie plays on the reader. Scenes like that one appear in Slammer—so be on the lookout.

Speaking of Guthrie’s skill at mind tricks, his third-person narration of the book comes from deep inside the mind of Glass. When Glass is confused or deluded, so is the reader; when Glass comes to a shocking realization, so does the reader.

During the course of Slammer, Glass’s mind unravels, carrying the reader on a bizarre psychological journey amid the fast-paced, unpredictable action—including a hostage-taking and an attempted prison break. The combination of mental unraveling and gripping action makes Slammer a true psychological thriller. Like other Guthrie books, Slammer may not be for everyone. Readers looking for finely-crafted Chandler-esque prose should search elsewhere. And the same goes for those who don’t enjoy gross farce. But for Guthrie fans and newcomers, Slammer takes readers on a blood-splattered 100-mile-per-hour frightening yet farcical joyride down a dark, dark highway. That’s vintage Guthrie. It’s the addition of the deep psychological element that makes Slammer perhaps Guthrie’s best thriller yet.