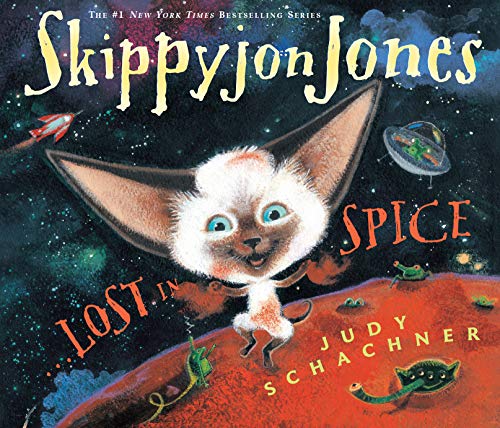 That ever-exuberant Siamese kitty with the huge ears is back in this rollicking tale. This time, he’s off for an adventure in his spice (um, space) suit to investigate the planet Mars.

Borrowing some red spice from his mama, Skippyjon, ignoring her admonitions not to make a mess, indeed makes a big red mess of spicy chili powder, transforming himself into a “weeck-ed” red Chihuahua. The “astronaut-ito” gets ready for liftoff to take “one small step into his closet for Chihuahuas . . . and one giant leap into the universe . . .” Once in space, he discovers like-eared pals in Los Chimichangos, who share his enthusiasm for the red planet.

And of course, what does he see up there? A Martian-ito! But wait a minute . . . that Martian-ito looks a lot like . . . And in a wonderful exchange of surfer-dude banter, accompanied by an illustration of the two nose to nose, eye to eye, paw to paw, they discover something interesting about each other:

After this revelation, the real Chihuahua seems largely disappointed in this discovery, though the mirror Skippyjon provides him to prove his point—dude, that they are “tweens”—seems to shock him into un-Chihuahua-like silence. So off goes Skippyjon to find his friends again and continue in his search for the real thing.

Judy Schachner’s wonderful, painterly illustrations perfectly mirror Skippyjon’s excitable nature. The details with which she energizes her characters are right on the mark, perfectly complementing the text.

There are those who might be turned off by the frequent use of real Spanish words as well as gringo-ized pronunciations of Spanish, but these are trademarks of this series and work well in the context in which Schaechner has developed the character of this irrepressible kitty boy.

Though there are a lot of dogs out there in picture book land, Skippyjon Jones: Lost in Spice is not one of them.