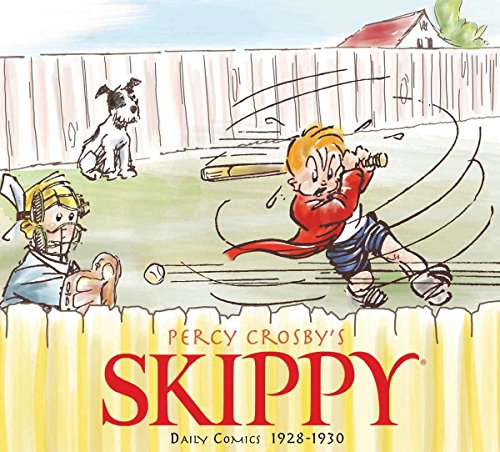 “This collection captures the peak of Mr. Crosby’s skill. The best. Simply the best.”

One of the reasons that Peanuts regularly tops the list of greatest newspaper strips ever is that Charles Schultz had a deep understanding of what it is like to be a child. Day after day he gently showed us that kids have many of the same fears, anxieties, and attitudes as adults.

Trey Parker and Matt Stone, the creators of South Park, have that same understanding of childhood. Both Peanuts and South Park remind us that kids suffer from neuroses, paranoia, delusions, jealousies, pettiness, fear and more.

The same thing can easily be said about Mark Twain. In The Adventures of Huckleberry Finn he showed us a child that was often more mature and responsible than the adults around him. In the world created by these artists children are not something to be coddled or catered to.

Skippy is a major link in that short list of children in American literature and media who are real but still kept a foot in the fantasy of childhood. He has real concerns and very real behavior. Nothing is sugar coated. His temper can get the best of him, and like so many of us he struggles to understand who he is.

He is a smart aleck but one you can easily root for, celebrate with and identify with when you see him dealing with loneliness as he is sitting on a stoop trying to figure out what is going on.

Percy Crosby, the creator of Skippy, had the same understanding of what it means to be a kid as Twain, Schultz, Parker and Stone do. He worked hard at reminding the reader that being a kid was as tough as being an adult. He felt that if he kept Skippy’s behavior real, that if he were able to show us the “secret life of children” it would serve as a reminder to what we were capable of as adults.

And readers responded. In his day Skippy was as popular as Peanuts and South Park. What Mr. Crosby created reflected the hopes, dreams, frustrations and innocence of life as he saw it around him.

Almost every strip in the new collection is an example of how Mr. Crosby succeeded. In a strip dated December 11, 1928, Skippy runs into a friend who is playing with a hula-hoop. Skippy tells him that he thought his friend he was going to buy a ball. The other child replies “I asked for one with a hole in it.”

To his friend that hula-hoop IS a ball. Mr. Crosby is showing us the world as the child sees it. It is the world as he the child defines it. Just like many adults do, he sees things exactly as he cares to.

Like Huck Finn, Lucy, and Cartman, Skippy isn’t all sunshine and lollipops. He has a code of honor that he must adhere to. The boy deliberately picks fights. He hides from responsibility. He mopes and can’t figure out why other people are so crazy. Skippy is us.

There is a drawing at the top of the introduction by historian Jared Gardner that simultaneously captures the attitude and confusion of Skippy.

Skippy is sitting alone. His left shoulder is slouched down, the elbow of his left arm rest across his left knee; his hat is tilted to the right and nearly covering one eye. The right corner of his mouth is a bit raised as if he is saying to us, “So what exactly are you trying to tell me? I am willing to listen, but it had better be good!”

In a single drawing he is threatening, friendly, and skeptical. It takes a lot of skill with a pen to do create multiple emotions in a single face.

His skill wasn’t just limited to how to draw people. Mr. Crosby knew how to use space beautifully. In one full panel strip dated August 9, 1929, we see the crowded beach to the left. All the way to the right is Skippy, standing in the water oddly doe-eyed and humbled. He is telling us that “I’d give anything to find my trunks.” We laugh but we also identify for we have all been exposed at some point and had to find a way out of the embarrassment and possible shame.

The darkness of the crowd scene perfectly balances the vast white expanse of the water where the poor kid stands. That wide swath of white also emphasizes the loneliness of Skippy’s situation. Mr. Crosby’s ability to capture a full range of emotions and reactions with just the white of Skippy’s eyes is amazing.

These strips capture a rare moment in American history. The country is coming out of the good times of the Jazz Age and heading into the oblivion of the Depression. Reading them in sequence we begin to see Mr. Crosby’s march toward political activism. This was a growing mindset that cost him his strip, the years of his life he spent in an asylum, and quite possibly his place among greats such as Twain and Schultz.

Skippy is one of the great, lost classics of the newspaper age. For the first time a newspaper strip featured a well-rounded, complex child as a character. Here is a kid that was jealous, a scammer, kind and a bit of a bully, as well as a child who would skip along with a balloon singing “La-De-Da.”

And it was all shown to us in gorgeous art. Without reading a word, you fall in love with the creator’s pen and understand everything.

This collection captures the peak of Mr. Crosby’s skill. The best. Simply the best.