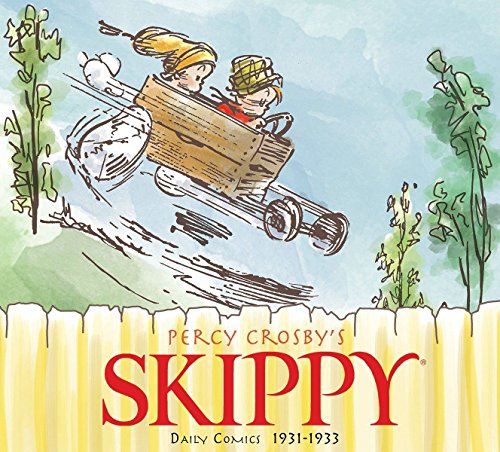 “Discover the kid in the hat and reap a rich, rich reward in art, humor and life.”

Percy Crosby’s comic strip Skippy captured childhood in all of its dreaming glory. The strip is an ageless picture of days that seem to last forever but slip by way too fast.

Skippy Volume Three: Complete Dailies 1931–1933 is a brand new collection of strips taken from Skippy’s long run of over 20 years. Few artists have ever been able to combine the dream-filled rambunctious nature of childhood with the realities of being alive like Crosby could.

Open to any page in this compilation of dailies and you will find gags that still make us laugh combined with art that thrills your eye. Crosby’s line is pure energy that somehow comes together in an emotive and peaceful manner.

While any Skippy strip is pure fun, the character is a crucial, but often forgotten link in the development of how children are portrayed in American media and literature. Crosby’s work is a perfect, albeit mild, picture of how children behaved inside an ever-changing American culture.

This chronological compilation of Skippy takes place smack dab in the heart of America’s Great Depression. The world that Crosby shows us proves that the hopes and dreams and imagination of a child transcends their surroundings.

Many of these strips balance the 20th century’s growing shift toward urban living in America with the more traditional, slower-paced ideals and existence of country living.

In one strip Skippy can be seen fishing in solitude, the pole hanging lazily from his fingertips. In another he and his pals are racing away from a broken shop window. Jalopies and go-karts careen out of control on city streets. Later, in the backyard, there is enough room to set up an archery range.

This balance in Skippy’s world is just one of the reasons that he was one of the most successful comic strips of his day.

At its quietest, Skippy holds small moments of wonder as seen by a child. Like Charles Schulz did for Peanuts and Bill Watterson did inside Calvin and Hobbes, Crosby created strips that showed us the depth of shared human experience. Even as it stretches across centuries.

On February 14, 1931 Skippy stands to the far left of the panel. Before him stands a vast, flat, dark, snow-covered field before him. Above the stark scene on the ground Crosby allows small pinpricks of starlight slip through darkness of the sky above.

At the far right a triangle pokes up. At first glance it appears to be the roof of a house. Take a second to look at it and your mind begins to think of it as a pyramid. Crosby’s fine line gives the small recognizable image a hidden dimension.

For a second it becomes a pyramid. Suddenly the whiteness and shadows of the ground before Skippy appear to be a desert under moonlight. Lacking real specificity, his hat and coat could just as easily be the garb of an ancient looking at the wonder of an Egyptian pyramid in the distance.

Humbled at what he sees, Skippy comments at the beauty of it all before him. “Gee, there’s enough stars up there to make a kind of wise crack about, but somehow they don’t let ya.”

Like Lucy running a booth devoted to Psychiatry or Calvin zipping around the planets with Hobbes, in one single panel Skippy moves from inner space to outer space and then bounces right back.

This most recent release from The Library of American Comics doesn’t just showcase a full run of Crosby’s magnificent work, it includes Jared Gardner’s third chapter in the life of the artist and writer as an introduction.

Detailing Crosby’s experiences at the time these strips first saw print Gardner gives us a look behind the scenes of success and the artist’s tremendous drive. During the period covered in this collection he accomplished a lot.

Crosby not only held onto his copyright for Skippy, but held the trademark as well. This led to an incredible amount of marketing opportunities as well as one of comic’s greatest successes ever seen on the big screen. The introduction is filled with photographs of games, cards, advertisements, jigsaw puzzles, and advertisements.

There were Skippy candy bars, Ice Cream, coloring books, Christmas cards, and clubs. And yes, a peanut butter which is still being made under its original brand name. Overseeing this marketing empire takes a lot.

At the time these strips came out Crosby also mounted public art exhibitions of his paintings, wrote books and dealt with Hollywood. Jared’s history of Crosby’s Hollywood experience as they made the 1931 film Skippy is a perfect example of how comic strips and film contrast as art forms.

The film, which starred Jackie Cooper, was one of the biggest success stories of the year. It was nominated for four Academy Awards and won one for Best Direction. Yet seeing the Hollywood dream factory process first hand ultimately left Crosby disappointed.

Skippy is one of the greatest kid stories ever seen in American media or literature.

He has Tom Sawyer’s manipulative energy and grounding in reality. Like Charlie Brown he struggles to understand and deal with everyone around him. Like the kids over on South Park Skippy knows that a lot of adult behavior is absurd and often beyond comprehension.

No matter what meaning you attach to Skippy it is one of the greats in comic history. Discover the kid in the hat and reap a rich, rich reward in art, humor and life.