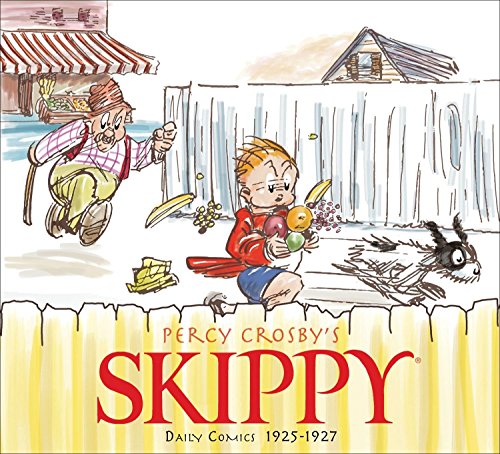 “In our hearts and minds, childhood is eternal. And so is Skippy.”

Percy Crosby, the creator of Skippy, understood the heart and focus of childhood as no artist before him. His pen conveyed movement and explosive energy in such a manner that characters often seemed to race past boundaries and nearly explode off the page. Skippy seemed to vibrate at a rate unlike any strip has.

The success of Skippy, who first appeared in Life magazine in 1923 and moved into newspaper strips two years later, made Mr. Crosby a millionaire during a time of unimaginable economic strife.

And yes, Skippy Peanut Butter is named after him.

Mr. Crosby’s creation is a direct and admitted influence on Peanuts as well as Calvin and Hobbes and almost every kid strip that followed.
Given Skippy’s amazing popularity and influence on the generations of artists that followed you would think that Skippy would still be lionized today.

But he hasn’t been. For multiple reasons Mr. Crosby’s creation slipped into a twilight world of the near forgotten. Primary among them was Mr. Crosby’s own discomfort with the way his life unfolded.

Always a political man, an advocate for the poor and unprotected, deeply distrustful of hypocrisy and quick to note it when he did see it, Mr. Crosby eventually ended up in an asylum where he spent the last 16 years of his life.

The Library of American Comics’ new collection of the earliest Skippy strips brilliantly introduces the character to a new world. The volume transcends the normal strip reprint series as Mr. Crosby’s life and his eventual decline enhances the art that the publisher has assembled.

The circumstances of Mr. Crosby’s life are a reminder that the more we think things change, the less they actually have. Today we believe technology is overwhelming us. But Mr. Crosby had just as much to deal with as we do now. All we have today is greater speed of delivery. During his time there were at least 13 newspapers in NYC alone. Radio was beginning to make itself known. Magazines (and pulps) supplied the majority of America with their primary form of entertainment.

Major cities saw the first appearance of the Nickelodeons. For five cents a visitor could view crude movies or even animation. Mr. Crosby quickly grew into the habit of walking out of work for a break and visiting these establishments.

The style of movement he saw jump across the screen in front of him would eventually prove to be a influence on the artistic style of Skippy when he appeared a decade later.

All of these advances came about because of the Industrial Revolution. There electricity and new printing presses. In addition to machines, it also helped introduce several new components of American society.

Primary among those were the beginnings of a new, non-rural, middle class as well as the beginnings of an expanded length of childhood. For the first time a family might have a few extra pennies to spend on an issue of Life and maybe three different newspapers. A kid could buy penny candy and lay under a tree while munching it.

The emergence of these two elements helped set the stage for the success of Skippy. There was a definite marketplace and an audience for the character. Editors who worked with Mr. Crosby at Life knew this, and so did Mr. Crosby.

The artist, who had already created nearly a dozen other strips, some of who ran two years, some of which lasted two months, pitched Skippy to his editors. They jumped right on the idea. His 15 years of selling strips and one panels was about to pay off.

Adults who read Skippy had a shared memory of just such a youth as they saw in the strip. A childhood involving bullies, sleds, baseball games, moments of quiet reflection and wonder, and even fights. Kids who read Skippy saw a heightened reality of a figure that they could personally identify with, one of their own age and mindset. Skippy was real. The experiences he had were nearly universal. The idea of a child strip rooted in hardcore reality was new. This wasn’t Little Nemo in Dreamland nor was it the fairy tales of Palmer Cox’s Brownies.

Skippy was a hit. A big one.

Volume One opens with 70+ pages of biography, art, and reprints. Historian Jared Gardner writes not only of the early life of Mr. Crosby, he also makes the NYC of 1870 and beyond appear before us. It is a deft balancing act, but even surrounded by the massive weight of history and the largest city on earth, the heart of Mr. Crosby’s life never leaves the story for a second.

Mr. Crosby’s formative years were spent in a new, nearly rural suburb of the city. We see him as a kid playing baseball and leading others in games of war and buying jellybeans with a found penny. Years later, such experiences would deeply inform his work on Skippy. As the volume ends, it only creates anticipation for more on the life of Mr. Crosby and more of Skippy’s wonderful adventures. This is a book for historians and nine year olds.

Here is how good Mr. Crosby is. In a four panel strip dated December 28, 1927, Skippy stands facing a corner. There is a scratchy floor and rising from that area are a few straight lines. It is a moment frozen in a child’s life. A single minute is an eternity. In the first panel Skippy, with his head lowered says a plaintive “Ma.” In the second panel he appears in the exact same position. His mother has ignored his initial request for his attention. This time he stretches out his plea to “Mama.” In panel three, he elongates his request even more with “Muh-ma.” There is a tenderness implied in his humble delivery. She finally answers “What is it?” He gently asks, “Can I look at another corner?”

It’s the same manipulative kid stuff Cartman from South Park has been pulling on his mom for the last ten years.

In our hearts and minds, childhood is eternal. And so is Skippy.